President Trump is signaling support for a still-to-be-written compromise immigration bill, but it remains unclear whether the legislation – which would give young undocumented immigrants a path to citizenship – can garner enough Republican support to pass the House.

Hours after striking a deal to avoid a messy internal rebellion, House Speaker Paul D. Ryan (R-Wis.) told Republican lawmakers Wednesday that Trump supports a move to consider a pair of competing bills next week. Later in the day, Trump’s top immigration adviser told a group of conservative lawmakers that the White House is supportive of the more moderate option, which GOP leaders see as the best chance to pass in the House.

We’ve been working hand-in-glove with the administration on this, Ryan said at a news conference.

The House is planning to consider a conservative bill that offers a limited path to permanent legal status for young undocumented immigrants, one that has little support from GOP moderates and is expected to fail. The other bill is being drafted to get both wings of the party on board, but there were still conservative doubts about the plan.

If any bill passes the House with amnesty in it, it fractures the party and the base would be disgusted, and it could cost the party the majority in the fall, said Rep. Steve King (R-Iowa), who invited Bannon to address lawmakers and recounted his message in an interview. The country knows what amnesty is.

King said many of the lawmakers at the session were receptive to Bannon’s argument. Later, when White House senior policy adviser Stephen Miller addressed the members of the Republican Study Committee to offer support for the compromise plan during a Wednesday lunch, some lawmakers had pointed questions about why elements of the more conservative bill – including a provision requiring employers to screen their workers for legal status – weren’t added to the other bill.

Until we get it clarified, then there are some problems among the RSC members, said Rep. Mark Walker (R-N.C.), chairman of the group, which counts more than half of House Republicans among its members.

Republicans have struggled for years to agree of any sort of immigration compromise, with pro-business Republicans who support expanding legal immigration and a possible amnesty for those living in the United States illegally sharply at odds with an ascendant populist wing that is fervently opposed to amnesty and wants to curtail any legal influx to protect American jobs and wages.

The doubts on display Wednesday cast a shadow over a deal reached late Tuesday to avert completion of a discharge petition supported by Democrats and moderate Republicans that would have forced votes on bipartisan bills that could pass the House.

Trump’s decision last year to end the Deferred Action for Childhood Arrivals (DACA) program sparked debate on legislation to shield dreamers – young undocumented immigrants who were brought to the United States illegally as children or overstayed their visas – from deportation. But talks among Republicans went nowhere, prompting the moderates’ revolt.

After Ryan pledged to hold votes on the two bills, the petition remained two GOP signatures short as a key deadline passed. While the threat has largely evaporated, there is no guarantee either bill can pass the House.

An outline circulated among lawmakers late last week and obtained Wednesday by The Washington Post sketches out how the visa system would work: A new immigrant visa would be created, open to DACA recipients and to the children of foreign nationals holding certain temporary visas. Those children must have lived in the United States continuously for 10 years.

After at least six years in temporary legal status, DACA recipients could apply for permanent residency. Those visas would be offset by canceling the existing Diversity Visa Program, which hands out 55,000 visas by lottery each year, and distributed according to a point system awarded, according to the summary, for things such as education level, age, English proficiency and the salary that an employer is willing to pay.

That complex system has been constructed to skirt conservative fears of creating a special pathway to citizenship for dreamers, and it has the backing of key conservative leaders including Rep. RaÃºl R. Labrador (R-Idaho), chairman of the House Judiciary subcommittee on immigration and border security.

I think a lot of my members on the Republican side will realize that this compromise is going to give them the exit strategy they need to show that they’ve passed a bill on immigration, said Rep. Dennis A. Ross (R-Fla.).

I’ve been here long enough to know that .â€‰.â€‰. when that goes from bullet points to bill text, sometimes things aren’t quite like you thought they were going to be, said Rep. Jim Jordan (R-Ohio), a leader of the House Freedom Caucus.

The overarching question is how aggressive a role Trump will play in selling the bill to Republicans – especially conservatives who have seen little political backlash in opposing prior attempts to grant legal status to undocumented immigrants.

Rep. Jeff Denham (R-Calif.), a leader of the discharge effort, saidhaving the president’s support helps to try to keep Republicans together, and House Majority Whip Steve Scalise (R-La.) said GOP leaders are working with different officials in the Trump administration to make sure that what we’re doing also coincides with the pillars he laid out and the things we all want to do to secure our border.

But Scalise declined to say whether he has a commitment from the president to round up votes to pass a bill, and Miller offered few details about how Trump plans to get involved in the process, according to Walker.

He’s not going to come out hard for it, said Rep. Mark Meadows (R-N.C.), the chairman of the Freedom Caucus and a Trump confidant. The general concepts, the president supports – I think that’s what the speaker has said. But at this point, no one in the White House has seen any legislative text. No one on Capitol Hill has seen any legislative text. And so to suggest that they’re strongly supportive of this is just inaccurate.

Meanwhile, there was little evidence that the Republican-written compromise bill could garner any Democratic support. The GOP outline does address one bipartisan priority – ending the Trump administration’s recent policy decision to separate parents and children detained at the border – but it also includes several proposals that Democrats have routinely rejected, such as funding a border wall, tightening standards for claiming asylum and eliminating some family-based immigration pathways.

We’ll see what it looks like when the full bill text is out, but I can’t imagine that it’s going to be anything that Democrats can support, said Rep. Pete Aguilar (D-Calif.), who worked closely with the discharge proponents. There’s so many bad things in this bill.

Democratic National Committee Chairman Tom Perez blasted the effort in a statement Wednesday in which he questioned the motivations of GOP lawmakers.

Let’s be clear: these Republican proposals aren’t to provide relief for Dreamers, they’re an avenue for mass deportations and to stoke fear in communities, Perez said.

Josh Dawsey and John Wagner contributed to this report. 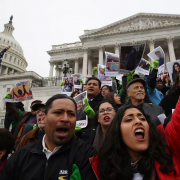 What’s next for DACA? ‘Don’t know’ 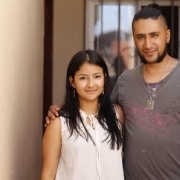 Dreamer gets glimpse of homeland as DACA deadline looms 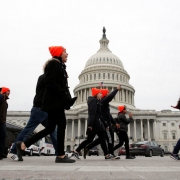 The return of the DACA fight in Congress, explained

Some businesses are refusing to hire DACA recipients. They are fighting back.
0 replies

She Fled to the U.S. After Being Raped Repeatedly by Her Husband. Trump’s...