Without warning, she dropped her head and began to cry.

Jessica, whose young son played nearby at a South Los Angeles health clinic, put her hands over her face to cover her tears.

When I asked what was wrong, she told me her husband had been ordered by Guatemalan gangsters to pay a protection tax or every member of his family would be killed. So they managed to get tourist visas and head north, but now they were in limbo.

They’re too afraid to go back home when their visas expire. But they’re frightened about what might come of them in the United States if they can’t get political asylum and choose to overstay their visas, and it’s easy to understand why.

For uprooted families crossing the border illegally, rattled by family separation and whatever horrors they may have experienced at home, the current Trump administration policy is to add one more crushing blow in the president’s campaign to make America great again.

About 2,000 children have been separated from their parents, and there have been stories of children in cages and toddlers crying.

You risk everything to get to the promised land only to find out its just another prison.

On the day I met Jessica at St. John’s Well Child and Family Center, I also met pediatrician David Bolour, who told me many of his patients from Central America have physical problems caused by the psychological and emotional damage they’ve suffered.

I had a 6-year-old who witnessed his grandfather’s hands being chopped off right in front of his eyes, Bolour said.

We’re causing twice the trauma to both the parents and their children, said Hilda Cruz of the Interfaith Movement for Human Integrity. Can you imagine this? These children have gone through so much violence in their hometowns, and then they get to a place that doesn’t recognize them as human beings.

Even some Republican leaders suggested Trump stop separating families. But as of Monday, the president was still barking like a bulldog.

The United States will not be a migrant camp, and it will not be a refugee holding facility, Trump said defiantly. Not on my watch.

We get it already, Mr. President.

Good job on the sweeps. Keep talking about the wall. Let’s stoke fear and division whenever and wherever possible.

We know who you are by now.

But this is different.

These are children, not political pawns.

And by separating them from their parents, you’re separating us from our values.

Those who argue that the United States can’t be expected to solve all the world’s problems, or provide shelter and comfort to everyone who chooses to cross the border illegally because of corruption and violence in their own countries, have a point.

We can’t do all that.

But what kind of country, richer than any other, tells destitute victims of rape, domestic abuse and gang violence that not only are they unwelcome here, but we’ll punish them and their children by locking them up separately before shipping them back to the nightmare they fled?

A lack of compassion

Four years go, Cruz and I met with a 30-year-old refugee from El Salvador who was being hosted by an aunt and assisted by the Catholic Diocese of San Bernardino while she awaited a deportation hearing. She wore an ankle monitor, had her 6-year-old son with her, and told us about paying thousands of dollars in extortion to gang members for the privilege of running a small store.

She told me and Cruz she had witnessed the slaughter of a neighboring family that refused to pay extortion, and four of her relatives had been murdered. Her aunt in Los Angeles sent her $3,500 for coyotes, who then locked the woman and her son in a warehouse in Mexico and threatened to torture them unless the aunt sent another $3,500, which she did.

They’re fleeing for their lives, Jessica Dominguez, an immigration attorney in the San Fernando Valley, told me of some of her clients.

She introduced me, on the phone, to a young Salvadoran man named Armando. He ran for his life three years ago, when he was 15, and settled in Miami.

I asked Armando why he left home.

Because gang members had recruited him and two cousins to extort business owners, he said.

My family didn’t want me to participate, he said, so he refused.

So did his two cousins, both of whom were tortured. One of them had his fingernails removed, according to Armando, and the other had a metal shard driven through his mouth and into his skull. Both were murdered. Armando headed north.

Dominguez said that for Armando and others, telling their stories won’t win them legal protection here.

Every asylum case is based on credibility, she said. You have to get a report from the country you’re coming from, and you have to have evidence to back it up. â€¦ But it’s not easy to get that.

Wouldn’t you do the same thing?

Dominguez told me that in the case of Jessica, the woman from the health clinic, she has an angle she might be able to work on an asylum case. Jessica’s husband said he suffered burns in a bomb attack on a bus and believes he was targeted for not bowing to the extortionists. Dominguez told him to see if he can dig up a report on the crime.

Like I said, you can’t open the door to everyone with a problem in another country, especially when we’ve got plenty of our own issues to deal with. It’s not fair to those who wait years for legal passage, there’s a cost borne by taxpayers, and there’s an impact on wages in some industries.

But this country has no room to lecture the world on greatness, virtue or morality as long as we’re the ugly, heartless barbarians who turn our backs to humanitarian crises and tear traumatized children from the arms of their parents.

Instead of making their lives more miserable when they arrive, decent people might instead ask what we would have done in their situation. 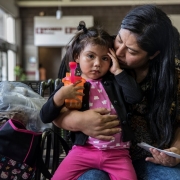 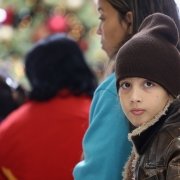 ‘Divided’, Part 2: The Chaos of Reunification