The federal government has spent $80 million to care for and reunite migrant children who were separated from their parents by immigration authorities, a figure that continues to grow months after the policy ended because more than 140 children are still in custody.

The first official price tag on family separations – which ended abruptly in June in the face of widespread public opposition – comes to about $30,000 per child. That data, along with new details on the children who remain mired in the policy’s lingering effects, were handed over last week by the Health and Human Services Department to members of Congress, who shared the report with The New York Times.

That is outrageous, said Representative Rosa DeLauro of Connecticut, the ranking Democrat on the House Appropriations subcommittee that pays for the shelter program that houses the separated children. She said the government could have more productively used the money on other efforts.

It has been at least seven months since the Trump administration began traumatizing thousands of families and they still have not fully resolved this tragedy, Ms. DeLauro said.

Among the uncertainties that remain is what will become of the children who are still in federal detention, apart from their families because of various legal and logistical hurdles.

The parents of 30 of the children have been declared ineligible for reunification based on their criminal histories, though immigrant advocates have argued that some parents were unfairly included based on old or minor convictions that would not affect their ability to safely care for their own children.

The remaining 117 detained children all have parents who were deported without them, according to the report. A variety of volunteers and nongovernment organizations working with the federal government have been trolling through remote parts of Central America to try to find the parents – 11 of whom have not yet been located.

Of those who have been found, seven parents asked that their children be returned home. Those deportations were still pending as of Nov. 6, when the report was drafted. A total of 99 parents had waived their rights to reunification and left their children in the United States alone, presumably fearing what the child could face if sent home. For most families, that means violence, severe poverty, or both.

Evelyn Stauffer, a spokeswoman for Health and Human Services, said that the agency takes its duty to care for all children referred to its care and custody with the utmost seriousness. She added that the agency was still working to reunify the children with their parents or place them with sponsors, and that 92 percent had been discharged thus far. Those children who could not be placed with sponsors will remain in the agency’s care until their day in immigration court, or until they turn 18, Ms. Stauffer said.

Lee Gelernt, the American Civil Liberties Union lawyer who represented separated parents in court, said that he would continue to push for the government to provide resources to the families.

It’s now been five months since the court issued the injunction and still there are many children sitting by themselves in government facilities, Mr. Gelernt said. Unfortunately, there’s still a lot more work to do to reunify all the children, and then we will need to get these families medical help to deal with the trauma caused by the separation.

Family separations came as a result of a Trump administration plan – known as zero tolerance – to prosecute anyone who crossed the border illegally. As a result, adults who were traveling with children had to be separated from them, because children cannot be held in criminal custody.

The policy quickly drew widespread condemnation from across the political spectrum, and Mr. Trump reversed it just two months after it was formally announced. In late June, a federal judge in San Diego, in the case brought by the A.C.L.U., ordered the government to reunify all of the families.

The report was the latest of several reviews of the separations policy. Last month, the Department of Homeland Security’s inspector general issued a report stating that the agency had begun its enforcement effort when it was not fully prepared to implement the administration’s zero tolerance policy or to deal with some of its aftereffects.

Among other problems, the report said, the agency failed to keep records of the locations of parents and children after they were separated, making reunifications more difficult, and violated rules that limit the amount of time that children can be held in processing centers along the border.

A second report, published in October by the Government Accountability Office, said that the Trump administration did not tell key government agencies about the zero tolerance policy before publicly announcing it in April, leaving the officials responsible for carrying it out unprepared to handle the consequences. 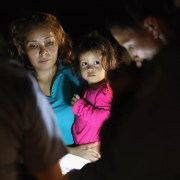 Trump’s Family Separation Policy Aims To Deter Immigration. That May Make It Illegal.

In Any Other Judicial System, the Government Cannot Just Take Away Your Kid

A recipe for toxic stress: an expert on why Trump’s family separation policy is so damaging to kids
0 replies

Dreamers Like Me Need Democrats To Put Immigration Back On The Table Now, Not...