The pandemic has hit the restaurant business hard. That’s creating an opportunity for some immigrant women in Denver

Denver (CNN)Most mornings, Silvia Hernandez barely has time to turn on the sign adorning her name at her eatery in Denver, Colorado. As breakfast orders come in, she’s working the flattop grill — flipping French toast, cracking eggs and warming tortillas for the green chile pork burritos that the regulars enjoy.

“I love cumin (but) the secret ingredient is love,” she says. “Love with a little bit of passion.”
Hernandez’s mother taught her at a young age to make the traditional dishes of her native Mexico. Those lessons sparked her interest in the culinary arts, which led her to pursue a gastronomy degree.
Now, as the owner of two Silvia’s restaurants — one in Denver and one in Boulder — Hernandez is putting her skills to use, though her journey hasn’t been all smooth sailing. And the pandemic’s strain on the food and service industries has brought its own set of challenges. 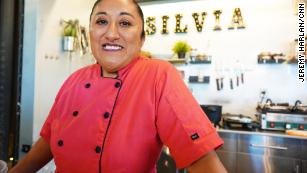 Silvia Hernandez
When Hernandez lived in Mexico, she operated a property management company that helped Americans buy property in the country. In 2013, she and her two children moved to Denver to be with her husband.
Within a year of moving to the United States, her marriage fell apart, leaving her with a choice: move back to Mexico or stay in Denver. Either way, she had to start over.
“Well, I’m already here,” she recalls about her decision to stay. “But I didn’t know what I wanted to do.” She worked as a nanny during the day and cleaned restaurant kitchens overnight.
All the while, she still had the desire to own her own business again.
And that’s when she found Focus Points Family Resource Center, a non-profit organization that aids low-income immigrant families. It was Hernandez’s first stop to forging her new path.

Nearly 10% of Colorado’s 6 million residents are immigrants, according to 2019 US Census Bureau estimates. The American Immigration Council, a non-partisan advocacy organization, estimates 263,000 of those immigrants are women.
“The Denver metro area is an amazing place welcoming immigrants and refugees every year,” says Matt Vernon, director of social enterprise for Focus Points.
Across the US, data shows that immigrants had higher rates of unemployment at the start of the Covid-19 pandemic compared to US-born workers — but those rates are recovering, particularly for immigrant women, according to a Pew Research study released in July.
Unemployment has been particularly high among Denver’s Hispanic population, according to Focus Points development director Cheri Gonzalez, who also notes that “jobs in the hospitality, maintenance, and retail sectors, which many of these Focus Points students rely on, are slow to return.”
Gonzalez said Focus Points has distributed more than $650,000 in federal funding to the community, including money from the 2020 CARES Act, the largest emergency aid package in US history intended to help the economy recover from the negative impact of the Covid-19 pandemic.
Hernandez says the women she met at Focus Points were interested in more than just getting a job.
“When I meet the other ladies and we start talking about what we’d like to do here … everybody said, ‘Oh, I’d like to have a business and sell food,'” Hernandez says. “That’s when I realized I’m not the only one that is thinking about making a food business.”
?”When I went to Focus Points to seek out a program to learn new skills to develop a culinary business, it didn’t exist at the time. All the ladies and (I) saw the need for a place to learn.”

A need for workers

Hernandez’s need for training, coupled with months of brainstorming and planning, led to the creation of the Comal Heritage Food Incubator in 2016. A paid training program, Comal is designed to teach women to work in, and operate, a professional kitchen.
“We are unique in the sense that we are focusing on helping immigrant and refugee women,” says Arden Lewis, Comal’s executive chef and program director.
“Most of these women have been cooking longer than I’ve been alive. We want to turn that talent into something more substantial by training them to work in a professional kitchen first and foremost, and then into owning the business.”
?In the five years since Comal opened, 28 women from nine countries — including Hernandez — have worked in the program.
?”I learned how to create a menu, all the accounting and taxes, the sanitary regulations, and how to pass a health inspection here,” Hernandez says.
?Lewis says the full program, which starts with dishwashing and teaches all the skills to be a line cook and eventual restaurant owner, takes 18 to 24 months to complete. But with the pandemic’s devastating toll on the culinary industry, Comal’s leadership reports greater interest from women in the community — and local restaurant owners — to get participants trained and into professional kitchens faster.
?”Prior to, and through the beginning of the pandemic, we got very few calls,” Vernon says. “But now, we’re starting to get interest we’ve not seen before. They want to get back out to work.”
?Vernon says the hospitality industry shutdown and switch to virtual learning last year forced most immigrant and refugee women to stay home, costing them the ability to economically support their families.
Now, he believes, there is an opportunity for them to jump back into the workforce.
Denise Micklesen, the Colorado Restaurant Association’s communications director, tells CNN that 91% of the state’s restaurants surveyed this year are struggling to hire staff, with more than 67% saying they have difficulty retaining the staff they do have.
?”Everyone is in desperate need for more hands,” Vernon says. And he notes there’s interest from restaurants that Comal can be a training ground for those potential workers. Hernandez echoes that sentiment, saying she would love to hire Comal graduates.
“Not being able to hire help has been the most stressful part of running my businesses,” Hernandez says during a break between her breakfast and lunch services. “But, I’m happy Comal gave me the opportunity to have my dream to open my food place, and give other women a voice and have their dreams, too.”
by2021, Ana Cabrera, Business and Entrepreneurship, CNN, Denver Restaurants, Immigrant Women, Jeremy Harlan, News, September 2021, Virus/inBusiness and Entrepreneurship, News

Ohio Senate candidate who compared refugees to alligators is the grandson of...

An outrage at America’s border Scroll to top