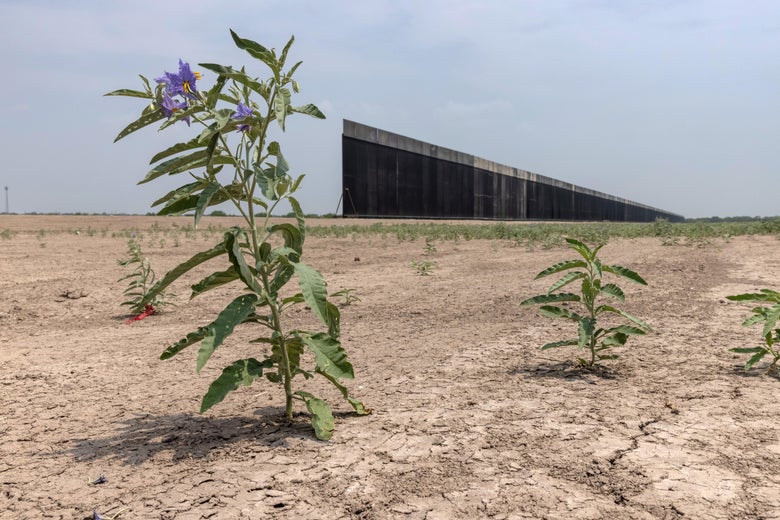 The “wall” as metaphor continues even after Donald Trump’s presidency. The border wall has always been a proxy, a political tool, a symbol of something, rather than a policy solution to anything. That’s why, rest assured, Mexico was going to pay for it; because it wasn’t ever real, even for those who believed in it, those who chanted for its construction. But the symbolism of doing something is an easier sell than the complicated reality of doing something useful. So here we are again six years after Trump injected the concept of a holy wall in his supporters veins, with Texas Gov. Greg Abbott, surrounded by his fellow Republicans Wednesday, promising more of the same—more wall.

As we all now know, walls to nowhere don’t come cheap. Realistic estimates of walling off Texas’ 1,200-mile border with Mexico could reach as high as $120 billion. That’s why Abbott wants believers to help pay for it and has opened an online portal to accept donations to do just that. The last time Republican wallers tried the GoFundMe route to border fencing it ended in federal indictments. Abbott says, yes of course, his state will chip in too to the tune of $250 million for the state-led border wall construction promising “hundreds of miles” of wall. Wall as far as the eye can see. A strong wall. Walls are strong after all, as is Texas’ governor. And most importantly you can see walls, a visual marker of tangible symbolic progress in the Trump GOP’s unending commitment to not dealing with the problem.

It will not surprise you that Abbott is currently revving up to run for a third term as Texas governor in 2022 and might just have eyes on a national run. “The Biden Administration won’t secure our border, so Texas will,” Abbott said in a statement. A 10-word homage to Trumpian magical thinking that was likely the point of this revival charade the whole time. Not to be outdone, cue Florida Gov. Ron DeSantis—another hopeful Trump successor—committing to digging a moat around his state. But a moat? It doesn’t matter. Build that moat! Build that moat!

Robert Reich on the truth about the U.S. border-industrial complex Scroll to top