ProPublica and the Bronx Documentary Center are co-hosting an intimate talk on ProPublica’s groundbreaking Zero Tolerance investigative series on family separation at the U.S.-Mexico border. Reporters Ginger Thompson, Topher Sanders and Adriana Gallardo will give a behind-the-scenes look at how they exposed the realities of the controversial policy and what was happening inside detention facilities that were holding migrant children but were closed to public view. The reporters will also speak about their experiences bearing witness to a major crisis.

The event is being held in conjunction with the BDC exhibition Trump Revolution: Immigration, which explores through photography the impacts of various immigration policies advanced by the Trump administration. Getty Images special correspondent John Moore, whose work is featured in the exhibition – and whose famed image of a Honduran girl crying while her mother is detained by the U.S. Border Patrol won photo of the year at the World Press Photo Awards – will also join the discussion.

ProPublica’s Zero Tolerance series, which uncovered conditions at Border Patrol detention centers where thousands of children separated from their parents and unaccompanied minors have been sent, began with a source who had an explosive piece of information. Wanting to share it with a reporter they could trust, the source chose Thompson, a ProPublica senior reporter who has spent nearly 20 years writing about the consequences of federal policy on both sides of the U.S.-Mexico border. The tip: nearly eight minutes of heart-wrenching audio of children inside a U.S. Customs and Border Protection facility.

This initial story set off a political firestorm and spurred an immediate change in the immigration debate, spurring the president to reverse his policy of separating children detained at the border from their parents. ProPublica went on to look deeper into how children had been affected by the policy, presenting powerful, in-depth accounts of their time in the U.S. immigration system. 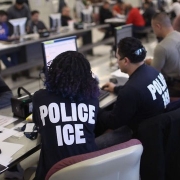 Trump administration is forcibly separating kids from their families 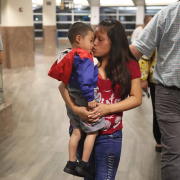 Your questions about the family separation crisis at the border, answered

Op-Ed: There’s a Ukrainian immigrant in my crawlspace, and I see him for...

WHEN TWO JUDGES KNOCKED DOWN SENTENCES TO PROTECT IMMIGRANTS FROM DEPORTATION,... Scroll to top