Sometimes it seems there is no right kind of immigrant, that many in this country would just as soon build walls of fear and hatred rather than bridges of shared visions. Does the right kind mean uniquely skilled or well-heeled or does it really mean white European? Will Mexican immigrants continue to be singled out as criminals or will Asians be derided next since their numbers more than doubled the combined arrivals from Mexico and Central American from 2013 to 2014?

When this country was first founded, the U.S. welcomed anyone who was willing to work to build the nation. This job is certainly not done – the more perfect union will always be a work in progress. The nation’s aging population and growing global competition require a constantly replenished and better skilled workforce, as well as a diverse army of entrepreneurs and innovators — the greater the pool of potential resources, the better. Germany has recognized this need in its willingness to take in 800,000 refugees from Syria and other war-torn nations.

More than a strong economic engine, our country needs a sustained commitment to our highest ideals of a shared, just society focused on the common good. The United States has become a mighty nation because it has encouraged the potential of the human spirit and has constantly sought to include more of the dispossessed into its democratic fold. It is the bold inclusion of diverse people, cultures and ideas that has gotten us this far.

A closed, isolated, repressive society may be the goal of some nations, but Americans inhabit an audacious land where ideas fight it out in the rough-and-tumble of the public square. Democratic greatness will not flourish under timid and small-minded leaders who no longer believe that America can do big, great things by leveraging the support of everyone working together. Embracing the immigrant is one way to ensure that this country honors its roots and renews its sense of the possible. It is, after all, the immigrant who is willing to risk everything for a piece of the American Dream. We specialize in the art of the possible – against incredible odds.

The right kind of immigrant is the one who still believes in an America that many native-born take for granted, who is willing to shoulder the national responsibility of being a good citizen — working hard, getting educated, caring for family and serving community and country. The U.S. is uniquely a country of immigrants, not to be assimilated or isolated but to be integrated and put to work on the enormous experiment of a government by the people and for the people.

Immigrants in the U.S. gave us our exquisite democratic framework; built the intercontinental railroad; settled the West and explored space; fed the nation; realized the absolute imperative of free public education; put the desire for justice into law; established churches, hospitals, banks and industries; excelled in science and the arts; and invented life-altering machines, medicines and jazz. Historically, before their arrival, they may have been political prisoners, common criminals or simply searchers for a better life. They came seeking everything from religious freedom to gold, oil and adventure. As they made their way, they hoped to find a home, a job, a purpose – somewhere that offered opportunity and allowed a fresh start. The past mattered not as much as the future that came with a Declaration of Independence, a Constitution and a promise of citizenship, of belonging. Some immigrants were wealthy; many more were poor, hungry and afraid. Those who survived the trip left everything familiar behind and started over holding fast to the possibility of reinvention and second chances – the ethos that powers this nation.

They built a civilization out of an inhospitable frontier and a nation from 13 squabbling colonies. They fought a civil war over the incomprehensible notion that slavery could somehow be acceptable in a free society. All of them were the right kind of immigrants because they dared to believe in the ideal of a democracy where the possibility of equality meant their efforts would be valued on their merit, not their status in society.We the current Undocumented Americans walk proudly in their footsteps and ask to be judged on our merits, on being the right kind of immigrant.

U.S. immigrants have always had to negotiate that no-man’s land where the idea of welcoming the foreigner clashes with distrust, even open hostility – a fear of newly arriving strangers who just keep coming because the desire for freedom and opportunity can’t be denied. Newcomers were often considered less human to justify their ostracization. There was a time when African Americans, Slavs, Latinos and Irishmen were considered to have lower abilities and intelligence and were certainly not the right kind of immigrant. Now Mexicans seemed to be the target of ant-immigrant vitriol. And some national leaders actually propose deporting all 11 million of us, America’s Undocumented, because we’ve come without being ordained the right kind of immigrant, for having the audacity to self-select ourselves as willing and able to work and fight for the American Dream.

The U.S. has long been the world’s major immigrant and refugee destination. The four major waves of immigration began with the arrival of the colonists in the 1600s reaching a zenith just before the 1775 Revolutionary War, followed by an influx in the 1820s lasting until the 1870’s depression. The third large immigration crest hit our shores from the 1880s to the 1920s and the fourth ongoing wave began in 1965.

By this time, the U.S. immigration system had a history of implementing a labyrinth of restrictions and quotas that often reflected poorly on our founding principles. When President Lyndon Baines Johnson signed the Hart-Celler Act on Liberty Island in 1965, he tried to fix the racist immigration quota system that the U.S. had institutionalized for decades. Until then, we accepted immigrants who were predominately white or northern European (70% were from the U.K., Germany and Ireland). With Hart-Celler, we opened our doors to a much bigger and more diverse world. We also gave priority to those with needed skill sets, refugees fleeing for their lives and relatives of permanent residents or American citizens.

Our beautiful America was built by a nation of strangers. From a hundred different places or more they have poured forth into an empty land, joining and blending in one mighty and irresistible tide. LBJ

When the Hart-Celler act was signed, the nation was 85% white. By 2043, the majority of Americans will be nonwhite. Over 50% of our children, five and under, are minorities and will grow up in the first majority-minority generation in our history.

So it’s no surprise that those, who have enjoyed the power of majority status for so long, are now feeling threatened by the changing skin tone of the nation. And without being blatantly discussed, this skin-tone fear colors the tone of the immigration issue on every front. There is no need to sound the alarm about our being the right kind of immigrants. We asked to be judged as Martin Luther King asked that his children be judged — not by the color of our skin but by the content of our character. It’s this character that makes us the right kind of immigrant – hard working and determined to make a better life for ourselves and our families and to give back to our communities and our nation. 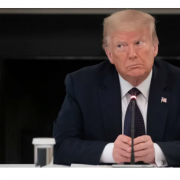 Is the Executive Office for Immigration Review incompetent – or is Trump hiding something? 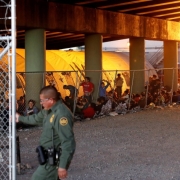 Editorial: Yet again, Trump ignores the law to impose his will on America’s neighbors 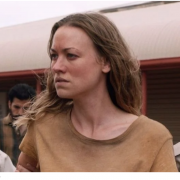 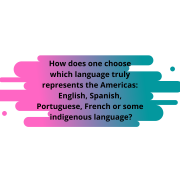 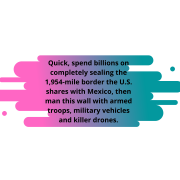 2 Nobel-winning economists speak out on our big economic problem: not enough immigration

Myth: They’re Flooding Into The Country Like Never Before
0 replies