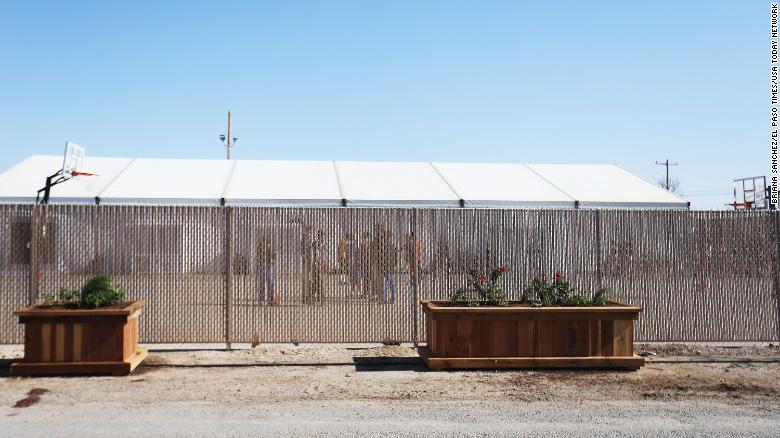 Migrant children play outside at a shelter for unaccompanied minors Friday, April 9, 2021, in Pecos.

The accounts mark the latest set of concerns raised by children and attorneys placed in pop-up facilities overseen by the Department of Health and Human Services. Last week, the HHS inspector general announced it was launching a review in the troubled Fort Bliss facility that also shelters minors who crossed the US southern border alone.
“When we eat meals, the meat and eggs are sometimes a bit raw, and the potatoes are a bit hard. Sometimes, I worry about eating the food because I don’t want to get sick. I know of two kids threw up after eating the food,” said a 16-year-old from El Salvador who also suffers from anxiety attacks and is staying at the Pecos site.
A 17-year-old from Honduras described trying to comfort a sibling who has been at the facility, intended for temporary stays, for more than 60 days. “My brother has gotten depressed here. He gets upset when we learn disappointing information about our case and we end up staying here longer. I try to cheer him up and help him stay strong throughout the process,” the declaration reads.
The 17-year-old also reported clothes getting lost in the laundry, leading some children to stop sending their clothes in fear of losing them and instead washing them in the dorm room bathrooms.
“We don’t have anything to clean the clothes with — we just use water and hang them up to dry,” the declaration says. The 17-year-old also included an incident where a staff member got upset and started yelling after the teen went looking for water because they didn’t like the water in the cafeteria. A 17-year-old from El Salvador, however, said staff treated them well.
Attorneys also found children at the Pecos site had “no religious services, few daily activities, and what little outdoor recreation they do have takes place in unshaded areas where temperatures sometimes reach over 110 degrees” and said the minors felt desperate.
In a statement, an HHS spokesperson said the department takes allegations seriously. “HHS’s mission is to safely care for unaccompanied children until they can be unified with a parent or a vetted sponsor. We are continuously working to improve the conditions and services required to safely care for children,” the spokesperson said.
The administration has come to rely, in part, on the pop-up sites to accommodate the record number of unaccompanied migrant children, including the facility in Pecos, which opened in early April and is the subject of newly filed court declarations. Of the more than a dozen temporary facilities that opened over the spring, four remain open.
The sites have received renewed attention amid the growing number of unaccompanied children apprehended and placed into HHS care until they are reunited with a sponsor, like a parent or relative, in the US. Officials at HHS, the Department of Homeland Security and the White House are meeting frequently to discuss the situation at the border, according to an administration official.

The Pecos site is located in a remote part of Texas and has a potential capacity of 2,000 beds. It provides shelter to boys and girls between 13 and 17 years old, though attorneys shared concerns about the facility opening up to younger children.
The concern widely shared by children and attorneys were the weeks-long stays — a theme across others emergency intake sites which were intended for short-term stays.
“A lot of it seems to boil down to disorganized case management systems and a lot of turnover and inconsistency in actually working the case,” said Leecia Welch, senior director of legal advocacy and child welfare at the National Center for Youth Law.
Welch and a team of attorneys are given access to speak with children because they’re monitoring government compliance with the Flores settlement, a 1997 agreement that governs conditions under which US officials can detain immigrant children. The attorneys interviewed children at Pecos in June and again in July.
As of July 23, 380 children had been held for 20 days or more at Pecos, including 65 children who had been held for 40 or more days and 10 children who had been held 60 days or longer, according to Monday’s court filing. The HHS spokesperson said case management services have improved at the site and children remain in care for an average of 24 days.
Case management is usually baked into the already established Office of Refugee Resettlement shelters that fall under HHS. Case managers work with children to relocate them with sponsors, like parents or other relatives, in the United States while they continue their immigration proceedings.
While the administration has tried to expedite releases in some cases, attorneys found case management services were still lacking, leading children to stay in facilities for longer periods. Children reported a series of issues, like delays and interruptions in case management.
RAICES, which provides legal services and has staff at the Pecos facility, found similar issues.
“They have no sense of what’s going to happen to them. They don’t have any communication. Each child is in their own individual state of panic. They don’t know what’s going on,” Jonathan Ryan, CEO and president of RAICES, told CNN. Ryan said he’s frequently visited the facility.
Aurora Miranda-Maese, the Office of Refugee Resettlement juvenile coordinator, told a federal judge in California Friday that some of the early causes of a longer length of stay at the temporary facilities, like Pecos, was contractors still hiring case managers and staff, adding that there have since been improvements.
There are fewer minors in the so-called emergency intake sites and more children in the agency’s state-licensed beds, she said, adding that Covid-19 vaccines have also been offered to children who are eligible.
As of August 9, there were 15,282 children in HHS care, including 5,349 minors in emergency intake sites.
by2021, August 2021, CNN, Criminal, Migrant Children's Shelter, News, Policy and Enforcement, Priscilla Alvarez, Texas, Unsafe Conditions/inCRIMINAL, News, Policy & Enforcement

Decline in Immigration Threatens Growth of Regions on the Rise