The shortage of foreign seasonal workers has forced some businesses in places like Old Orchard Beach, Maine, to limit their hours or close for an extra day a week.Credit…Tristan Spinski for The New York Times

SALT LAKE CITY — Tyler Holt summed up the problem his Utah landscaping business faces every year. “People who want to be in the job force want stability — if they want to work, they work full time,” he said. “Locally there’s just no workers who want to do anything seasonal.”

The complaint has been echoed not only by landscapers in Utah, but also by amusement parks in Wyoming, restaurants in Rhode Island, crab trappers in Maryland, camps in Colorado and thousands of other businesses around the country that depend on seasonal workers from abroad to work lower-wage nonfarm jobs.

The scramble for these temporary guest workers has been intense in recent years, as the jobless rate inched down and tensions over immigration policy ratcheted up. But this year, after the coronavirus pandemic first halted and then seriously constrained the stream of foreign workers into the United States, the competition has been particularly fierce.

The Biden administration responded to frantic pleas from small businesses in the spring. It did not renew a pandemic-related suspension of the J-1 program, which provides short-term visas designed for foreign students who come to the United States to work and travel. Soon after, it raised the quota on temporary visas under the H-2B program for temporary nonagricultural workers, which are issued through a lottery.

But travel restrictions, backlogs and delays at foreign consulates in approving applicants have still left businesses from Maine to California in the lurch.

Mr. Holt, the chief executive of Golden Landscaping and Lawn in Orem, asked for 60 H-2B workers, hoping the team could be in place by April 1, when the season began. He struck out in the initial lottery, but was luckier the second time around, when the administration increased the quota by one-third.

On July 9, Mr. Holt was overjoyed to hear that his application had been approved. But now, roughly halfway through his eight-month season, still no workers have arrived.

Daily business updates  The latest coverage of business, markets and the economy, sent by email each weekday.

“Nothing,” he said with disgust when asked two weeks later about an update.

Landscapers like Mr. Holt employ more H-2B workers than any other industry — roughly half of the total approved. And their inability to get a work force in place by the start of the season has been costly.

Ken Doyle, the president of All States Landscaping in Draper, Utah, said the late arrival of 27 temporary foreign workers had cost him 15 to 20 percent of his business, about $1 million.

“We’re so far behind,” he said. “We’ve lost some very large accounts.”

Mr. Doyle acknowledges that the work can leave blisters and an aching back. “It’s a hard job,” he said on a day when the temperature trudged past 100 degrees. “It’s hot outside. They’re digging holes for sprinklers or trees, laying sod and lifting heavy items.”

Under the H-2B visa program that Mr. Doyle and Mr. Holt rely on, the number of seasonal foreign workers is ordinarily capped at 66,000 a year, split between the winter and summer season. Veteran workers, who returned year after year, used to be exempted from the total, but Congress halted that practice in 2017 as the immigration debate got heated. The next year, the government instituted a lottery system that injected a new layer of uncertainty on top of a frustrating process.

“It’s quite the gamble if you’re going to be a viable business,” Mr. Doyle said. 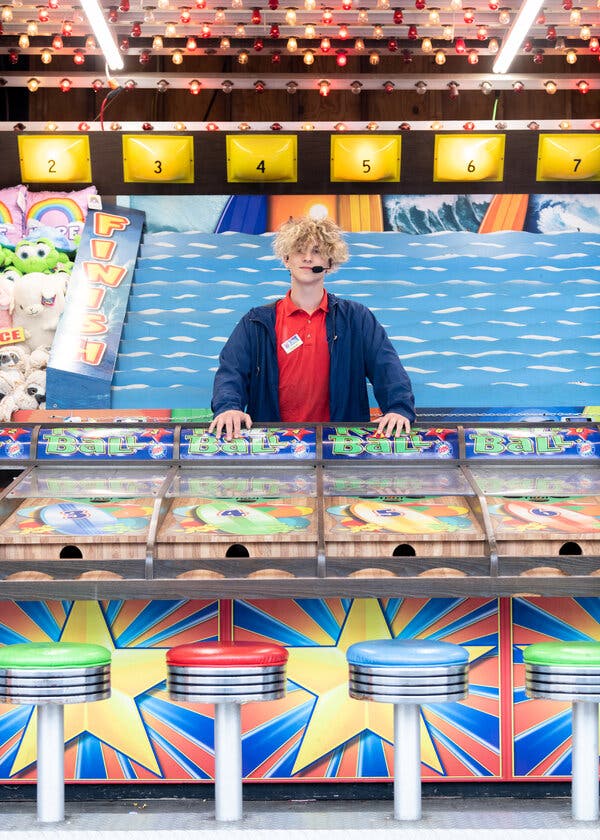 Programs for temporary guest workers have long come under attack from several corners. Labor groups and immigration critics argue that it robs American workers of jobs and depresses wages. And every year, there are disturbing examples in which foreign workers are exploited by employers, cheated out of pay or living in squalid conditions.

Many employers counter that people don’t understand the peculiarities of the seasonal labor market and changed attitudes, particularly about manual work.

“Fifteen, 20 years ago we were able to get local summer kids in high school or college,” Mr. Holt said. “Those workers are just not there anymore. It’s easier to do other things than hard labor for eight to nine hours a day.”

Mr. Doyle spent nearly $30,000 advertising for workers as far away as Nevada and got no response, he said. For the last year, he has had a 20-foot trailer parked outside his office, emblazoned with a sign proclaiming: “NOW HIRING. WALK-INS WELCOME.”

“I had two people drop in all year,” he said.

Higher wages could encourage more American-born workers to apply to these jobs, said Muzaffar Chishti, director of the Migration Policy Institute at the New York University Law School. But he argues that in every labor market, there are difficult, unpleasant, low-paid jobs with no opportunity for advancement — like agricultural work or meatpacking — that are considered less desirable both for economic and for cultural reasons.

Some of the attitudes toward jobs, particularly in the service sectors, are changing, he said, but “we haven’t quite understood yet the impact of pandemic.”

Temporary guest workers have also gotten entangled in broader and more bitter arguments over immigration. There is a widespread misconception, Mr. Chishti said, that all foreign workers are eager to settle in the United States.

“A lot of workers don’t necessarily want to come and live here forever,” he said. “They want to work legally and travel back and forth. Their life in Mexico, for example, may be better than life in a U.S. city.”

In the meantime, employers are struggling. Small resort towns often depend on international seasonal workers because their population isn’t sufficient to fill all of the suddenly available slots at hotels, restaurants, ice cream shops or ski slopes that serve the hordes of tourists who appear and then vanish.

“We just don’t have enough local workers to be able to support the economy as it needs to be in the summertime,” said Jen Hayes, who is the J-1 visa program liaison for Old Orchard Beach, a coastal town south of Portland, Maine.

Historically, the town has had anywhere from 650 to 740 international student workers in the summer — from countries including Turkey, Romania and Russia — but Ms. Hayes estimated that there were only 125 to 150 as of late July. A meet-and-greet at the start of the summer that typically bustles with activity drew only a handful of people.

The labor shortage has forced some businesses to limit their hours or close for an extra day a week.

Exorbitant housing costs in vacation-friendly enclaves — whether in the Hamptons, in Ketchum, Idaho, or in Provincetown, Mass. — further shrink the pool of available workers, foreign or domestic.

In Maine, where the economy relies heavily on tourism and out-of-state visitors, workers on J-1 or H-2B visas generally make up about 10 to 14 percent of the seasonal work force, said Greg Dugal, the director of government affairs at HospitalityMaine, a trade group.

But this year, the state will be lucky to receive half the usual number, Mr. Dugal said, adding that many who were approved for the summer arrived later than usual because of processing delays.