When the Trump administration defended its now-suspended policy of family separation, it offered various justifications, most of which boiled down to the following: The child’s suffering is the price the parent must pay for breaking the rules. Children are, in essence, collateral damage.

One of those justifications – from Homeland Security Secretary Kirstjen Nielsen in response to a reporter’s characterization of the policy as terror – came with a kernel of truth: I mean, that would be like saying that when people commit crimes in this country, and they’re put in jail and separated from their family, that somehow that’s terror, she said. In the United States we call that law enforcement.

Perhaps they are one and the same. Every day, we lock parents up for decades in our prisons regardless of how it will affect their children, and no one bats an eye. Those who are demanding that children not be treated as collateral damage when it comes to immigration should be just as vocal when it comes to criminal sentencing.

A longtime public defender recently told me that hearing the recording of migrant children crying for their parents reminded her of a moment several years ago when her client, a single mother, was sentenced to two years in prison. Standing before the judge, the mother turned around to say goodbye to her 4-year-old daughter, but court officers berated her for not facing the judge. As the little girl was escorted from the courtroom into the hallway screaming for her mother, the woman turned back to the judge, silent tears streaming down her face. The judge raised his voice over the daughter’s sobs and proceeded with the woman’s sentencing.

Since the tough-on-crime period beginning in the 1980s, the United States has become addicted to long sentences. It now has the highest rate of incarceration in the world, and half of the growth in the state prison population between 1980 and 2010 has been attributed to increased sentence lengths. These policies did not have their intended effect, which was to enhance public safety. They did, however, have a measurable effect – a devastating one – on the millions of children who were left behind.

The majority of people held in state and federal prisons are parents of minor children. One in 14 American children , most of them younger than 10, has seen a parent incarcerated. These children are sometimes referred to as the invisible victims of mass incarceration, and their suffering has been characterized as its most pernicious ancillary effect. When we imprison parents, their children suffer socially, psychologically and economically, and the suffering often follows those children into adulthood.

Having a parent incarcerated has been linked to a range of negative learning and health outcomes, including falling grade-point averages, dropping out of school and higher rates of anxiety, depression and post-traumatic stress disorder. The risk of ending up homeless or in foster care also spikes.

Experts have found that children of incarcerated parents are more likely to display aggressive behavior, and a team of researchers at Princeton University concluded that this, in turn, may promote imprisonment among children, passing the costs of incarceration from one generation to the next, producing whole groups of deeply and enduringly disadvantaged families.

The loss of a parent to incarceration is most obviously disruptive when it comes to life sentences, such as in the case of Alice Marie Johnson, the first-time drug offender who was recently reunited with her children, grandchildren and great-grandchildren after President Trump commuted her life sentence. But even for those sentenced to less time, every year of incarceration for the parent is a year of punishment for the child. The difference between a five-year sentence and a 20-year sentence can mean the difference between growing up with a mother at home and getting to know mom as an adult.

When judges dole out sentences, they do not normally take into account whether the person’s child deserves to be deprived of a parent. The federal sentencing guidelines, in fact, state outright that for the purposes of making a sentencing determination, family ties and responsibilities are not ordinarily relevant.

One need not be a prison abolitionist to acknowledge that prisoners themselves are not the only ones punished when a sentence is meted out. Adding the family circumstances of a defendant to the list of factors to be weighed at sentencing could infuse some proportionality into criminal sentencing and would go a long way toward limiting childhood trauma.

To the children left behind without a parent, the damage is not collateral: It is visceral, undeserved and often permanent. We should be demanding more humanity of our system across the board – not just at the border. 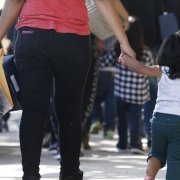 Lawyers on the Border Still Dealing With Fallout From Family Separations 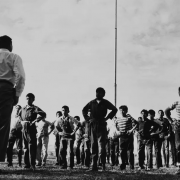 Cages Are Cruel. The Desert Is, Too.

Man arrested after shouting ‘womp, womp’ and pulling a gun on immigration... Scroll to top