The list has 18 entries: 18 mothers, identified not by name but by numbers assigned to them by Immigration and Customs Enforcement.

Scrawled on the back of religious leaflets, it is a snapshot of suffering here at the Eloy Detention Center, an immigration jail where scores of parents wait for information about children stripped from them at the U.S.-Mexico border and scattered across the country.

It’s been four months since I saw my son, one woman wrote next to her nine-digit alien registration number. He’s three years old.

I haven’t even spoken to her, wrote a mother separated from her 5-year-old for weeks. I’m desperate.

These are just the ones in my cell block, said Maria Veliz, the detainee who compiled the list and had been separated from her two children for more than a month.

We are all in the same pain, the 32-year-old from Guatemala said during a jailhouse interview Tuesday afternoon. We are all tormented.

The injunction followed months of legal arguments and an about-face from President Trump, who, facing mounting criticism, signed an executive order halting the separations last week.

But even as immigrant rights activists hailed the ruling, it was not clear what it would mean for parents such as Veliz who are locked up thousands of miles from their children, awaiting asylum or immigration hearings in courts.

We are hoping the government doesn’t create mass family immigration prisons, said Lee Gelernt, an attorney with the American Civil Liberties Union, which filed the San Diego lawsuit. The administration has been floating that idea. We are not deluding ourselves.

Across the Southwest, parents separated from their children by zero tolerance sit in detention facilities, watching Spanish-language news for signs they may soon be released. They try to support each other – celebrating when someone gets out and praying for those that remain. But they also pass their sorrow from cell to cell, like a sickness.

At the Port Isabel detention center in Los Fresnos, Tex., some group meetings with immigration lawyers have turned into group sobbing sessions. A few days ago, several detainees swore they suddenly heard the sound of children inside the jail, as if overtaken by a collective delusion, three lawyers said.

It’s given them hope, said Ruby Powers, an immigration lawyer who visited the detention center.

At Eloy – a privately run immigration jail surrounded by barbed wire, an electrified fence and miles of scorching, sunbaked desert – the injunction could not come fast enough.

An ICE spokeswoman would not say how many parents separated from their children were being held at the 1,500-person facility, but Veliz and another mother – separated from her son six months ago, before the Trump administration began its widespread policy – said they knew of at least 40 cases.

Most of the mothers on Veliz’s list are from Guatemala, she said, and their notations are in Spanish. But at Eloy, parents’ pleas to be reunited with their children come in many languages.

Bhavan Patel sat in an immigration courtroom there Tuesday, a tiny, solitary figure in a faded green prison uniform. She fled political persecution in Ahmedabad, India, traveling to Greece and then Mexico before crossing the U.S. border illegally with her disabled 5-year-old son, Patel and her attorney said during a bond hearing. Patel’s hair – she is 33 – had started to turn white. She wrung her hands incessantly.

Her son is not doing well, said her attorney, Alinka Robinson, as a telephonic translator relayed the proceedings to Patel in her native tongue of Gujarati. Robinson asked Judge Irene C. Feldman to grant her client a $10,000 bond so she could reunite with her son.

After an ICE prosecutor said Patel was a flight risk, the judge quizzed her about her path to the United States and whether she had paid a smuggler. An asylum officer had already found she had a credible fear of being hurt or killed if she were sent back to India.

She told the judge that her brother arranged her passage and that she never paid a smuggler.

Feldman seemed skeptical and set bond at $30,000, making Patel one of the few separated parents at Eloy to have a bond set, according to detainees.

Veliz said she had requested a credible-fear interview, which launches the asylum process, but had yet to receive it. Until she does, Veliz has no hope of a bond hearing.

She said she and her two children had fled their home in northern Guatemala in May after years of escalating violence. Her husband was already living in the United States, having come two years earlier.

Several times thieves came into my house, stealing clothes and gasoline the family could not afford to lose, she said. There were so many nights that my children were scared.

Her husband sent money for them to make the journey through Mexico. When they were near the border, Veliz sent photos to him in Massachusetts, showing her and her children smiling in the countryside.

On May 23, after climbing over a wall at the U.S. border, Veliz and her children surrendered to federal agents and were taken to a chilly Border Patrol processing facility. After they spent three days on thin mats on the concrete floor, agents came to take the children away.

Her 9-year-old daughter tried to cling to Veliz’s feet, and her son, a year older, held her arms, sobbing, until she told him it would be okay and he could let go.

Mommy, I’ll call you, Veliz recalled her daughter saying. The girl kept her head lowered as she was led away.

She didn’t want to see me stay there, Veliz said.

Veliz had made the children memorize their father’s phone number. Two days later, they called him from a shelter in Chicago.

Papi, cuando nos va a traer, they asked. Dad, when are you going to bring us?

But Veliz did not know for two more weeks that they had made contact, until she arrived at Eloy.

Are you still where we left you? her daughter asked the first time they spoke by phone.

Veliz recently signed paperwork allowing her husband to take the children. But they have yet to be released from the shelter, and he does not have the heart to tell them their mother won’t be waiting for them in Massachusetts.

Veliz spoke to her son on Sunday, his 11th birthday. The family had planned to celebrate together in the United States. Now they were in three states in three different parts of the country.

Her son told her a shelter employee had sung him Happy Birthday, so Veliz sang Las Mañanitas, the Latin American equivalent. She sobbed as she recounted the story at Eloy on Tuesday.

Wake up, my dear, she sang to the son she longed to see again. How lovely is the morning in which I come to greet you.

Her daughter’s 10th birthday is in late July. By then, the judge’s order requires the government to have reunited Veliz and her children, one way or another.

Reached by phone Wednesday morning, Veliz said that she was unaware of the ruling but that she would rather be locked up with her children than worrying whether they are safe without her.

We’ll celebrate both of their birthdays here, she said. Together. 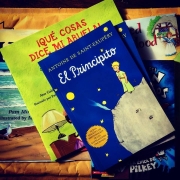 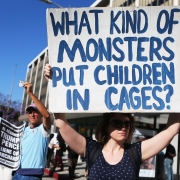 Family relationships have long been part of the bedrock of U.S. immigration policy. Then came Trump

After 40 Days Apart and a Missed Flight, a Migrant Family Reunites Most immigrants are in the U.S. legally, something most Americans don’t... Scroll to top