A Republican candidate for Kansas governor who has advised President Donald Trump is attacking a state law that helps young people living in the U.S. illegally go to state colleges, appealing to his party’s conservative base in a tough GOP primary race.

Kansas Secretary of State Kris Kobach tweeted recently that repealing the policy of allowing some young immigrants to pay the lower tuition rates reserved for legal state residents would stem the rising tide of tuition hikes. He backed off that questionable claim earlier this week but argued that the law subsidizes illegal immigration and is unfair to legal U.S. residents.

The law has split Republicans since its enactment in 2004. And of the eight major candidates, the only other to support its repeal is GOP Gov. Jeff Colyer.

But Kobach’s tweet – in the wake of proposals from state universities to raise tuition – followed a GOP primary for Georgia governor that became a contest of which candidate would be toughest on illegal immigration. Georgia Secretary of State Brian Kemp advanced to a July 24 runoff after boasting in an ad about owning a big truck in case I need to round up criminal illegals and take ’em home myself.

That is a smart issue to talk about with Republican voters, Patrick Miller, a University of Kansas political scientist, said Thursday. Kobach’s probably not going to get those more centrist voters. He really needs to own that conservative vote.

Before being elected secretary of state in 2010, Kobach built a national profile as an advocate of tough national, state and local policies against illegal immigration. He was the most prominent Kansas elected official to endorse Trump before the state’s presidential caucuses in 2016.

Kobach has long criticized the 2004 tuition law, which applies to students who attend a Kansas high school for three or more years and apply for legal status. The Kansas Board of Regents said 670 such students enrolled in state universities, community colleges and technical colleges last fall.

Colyer said this week that he would sign a bill to repeal the law if it reached his desk.

I think Kansans would rather have a different priority, he said.

In-state tuition rates are considerably lower than the rates paid by out-of-state students, and Colyer’s administration estimated the current savings for in-state students to be $2.3 million. Kobach suggested a higher estimate of $4 million during a question-and-answer session with reporters this week.

You could take that $4 million and subsidize the tuitions of Kansans and U.S. citizens, Kobach said.

The regents have blamed tuition increases at state universities on past cuts in state funding, which is still nearly $30 million below its 2009 peak and far more than even Kobach’s estimated subsidy for immigrant students. Kobach acknowledged that tuition increases are a much bigger issue that can’t be solved solely by repealing the tuition law.

But Democratic candidate and former state Agriculture Secretary Joshua Svaty said that if the young immigrants were forced to pay the higher tuition, they would not attend college, costing the universities tuition dollars. He and fellow Democrats state Sen. Laura Kelly and ex-Wichita Mayor Carl Brewer said the law helps young immigrants become contributing members of the workforce.

The idea that we would punish young people who are in this country through no fault of their own is inconsistent with our values, added independent candidate Greg Orman, a Kansas City-area businessman.

While Republican former state Sen. Jim Barnett voted against the law as a legislator, he said he would not support its repeal because the state should train young people everywhere possible.

GOP Insurance Commissioner Ken Selzer’s campaign said he believes that instead of simply repealing the law, the state should ensure that every student receiving in-state tuition is a citizen or on a clear path to legal status. 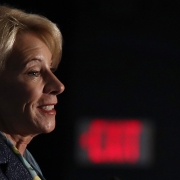 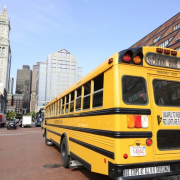 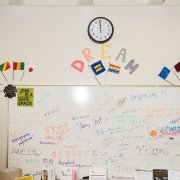 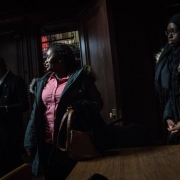 African Immigrants Find an Open Door at a Bronx College

DeVos: Schools should decide whether to report undocumented kids
0 replies