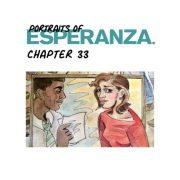 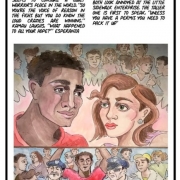 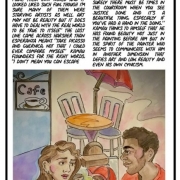 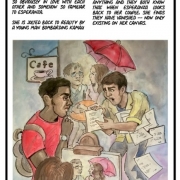 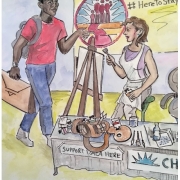 (CNN)Just yards from where thousands of migrants are waiting to be processed by American immigration authorities at the US-Mexico border in Del Rio, Texas, a new field hospital has opened up.

The hospital became fully operational on Tuesday, and treated roughly 70 patients in its first 24 hours, according to Dr. David Tarantino, chief medical officer for Customs and Border Protection (CBP). Before the facility was opened, CBP emergency medical technicians and paramedics who had been deployed to the border treated about 1,000 people.
“From the beginning, we recognized the humanitarian challenge of this event,” Tarantino told CNN’s Rosa Flores on Wednesday.
Thousands of migrants, many of them Haitian, have crowded in makeshift camps under the Del Rio International Bridge for days, at one point topping 14,000 people — sleeping in the dirt, surrounded by garbage and without much food and water. The surging crowds were a result of messages spread by word of mouth or social media that the border at Del Rio was open, US Border Patrol Chief Raul Ortiz has said.
As of Thursday evening, roughly 3,050 migrants remained under the bridge waiting to be processed, according to Lewis Owens, the Val Verde county judge.
Many of the migrants at the border embarked in monthslong journeys to make it to America. Some Haitians waiting to be processed were living in South America for years, after fleeing their homeland following the 2010 earthquake. Others fled recently, due to a combination of economic depression and political instability following the assassination of the president in July and an earthquake in August that left more than 2,000 people dead. 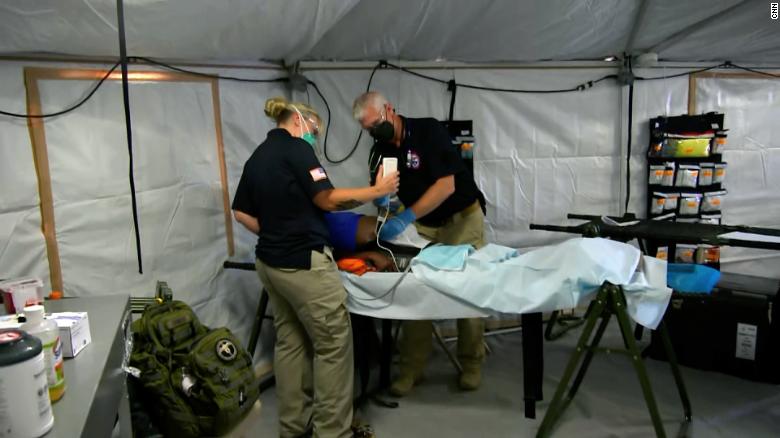 Officials say the hospital is meeting a humanitarian challenge.
More than 150 CBP EMTs and paramedics were deployed to assist the migrants at the border, Tarantino said.
“We’ve been addressing water, sanitation, hygiene, food issues and medical has been a top priority from day 1,” he said. “Our idea was to ensure that medical (issues were) covered for the migrants but also protect our workforce, but also lessen the burden on the local health system.”
Since the field hospital became fully functional, staff have handled environmental and heat injuries, migrants with nausea, others with respiratory illnesses from the dust and environment, as well as pregnant women with issues or concerns, Tarantino said.
“We did have a delivery the other day that was done on site here, between our EMT, paramedics and our on-site medical team. We were able to handle that, and then we handed that off to the local health system,” he added.
The field hospital consists of services including initial triage, vital sign and intake assistance, in which staff members are able to determine whether a case is urgent, or acute and needs emergency treatment or referral, Tarantino said.
“At our peak, we had over 14,000 persons here (at the border) and some of them were here for beyond 24 hours and in the open environment setting. And accounting for the journey that they’ve had there is certainly a risk for public health and medical issues and concerns,” Tarantino said. “So we wanted to be very responsive to medical needs and make sure that we had a robust capability on site.”
The Biden administration has faced bipartisan criticism for its handling of the influx of migrants. Some Democratic lawmakers called on the administration to stop deporting those who have fled Haiti and slammed its treatment of the migrants after videos from news outlets appear to show Border Patrol officials using aggressive tactics when confronting them. Officials on Thursday said they would suspend horse patrols.
Department of Homeland Security officials declined to provide a number of how many migrants have been released into the US, saying it takes time to collect that data. They added that there are a number of reasons why people may not be expelled based on case-by-case determinations. One official said “several thousand people” who were in Del Rio are believed to have returned to Mexico.
Twelve repatriation flights have left the US and more than 1,400 Haitians have been returned to Haiti since Sunday, the department said. More than 3,200 Haitians have been moved from the Del Rio camp to CBP custody or other processing facilities along the border to be expelled or placed into removal proceedings.
Daniel Foote, the US special envoy for Haiti, handed in his resignation to Secretary of State Antony Blinken, saying he would “not be associated with the United States inhumane, counterproductive decision to deport thousands of Haitian refugees” from the border and added the US policy approach to Haiti remains “deeply flawed.”

Rosa Flores reported from the border and Christina Maxouris wrote in Atlanta.