As Dennis Rivera-Sarmiento sat in a detention center 80 miles away from his Texas home this past winter, clad in a blue inmate uniform, he could see his high school diploma slipping further from his reach. Graduation was in June, but a schoolyard scuffle with a girl who he said had called him a racial epithet had gotten him arrested by his high school’s police officer.

Then a state law that required the Harris County Sheriff’s Office to cooperate with federal immigration officers flagged him for deportation, back to his native Honduras, from which he and his family had fled five years ago.

The case of the quiet kid who was good at soccer hauled from high school to a deportation center turned Mr. Rivera-Sarmiento into a cause celÃ¨bre in Houston, a textbook case of what immigration advocacy groups fear could happen as schools tighten discipline in the wake of school shootings, the police ratchet up sweeps for gang members and local law enforcement draws closer to the federal immigration authorities.

The school, the community and plenty of lawyers rallied to Mr. Rivera-Sarmiento’s side, and on Saturday, he will don a green graduation gown and cross the stage as part of the class of 2018 at Stephen F. Austin High School.

But beyond that stage, his future is decidedly uncertain as he awaits an asylum hearing that will determine his future in the United States.

I actually don’t think this is real, Mr. Rivera-Sarmiento, 19, said. I never thought I’d be graduating. I thought I would be in Honduras right now.

No one is sure how many students like Mr. Rivera-Sarmiento have been channeled from the principal’s office to the custody of Immigration and Customs Enforcement. A spokesman for ICE said that the agency cannot track the number of students detained based on school arrests because it does not record how undocumented immigrants are originally arrested.

But immigrant groups think that given the anti-immigrant atmosphere fueled by the Trump administration, the fear is justified. Schools are still widely considered sanctuaries for immigrant students, and educators have been their fiercest advocates.

But, said Angie Junck, supervising attorney for the California-based Immigrant Legal Resource Center, all it takes is one rogue school employee to call ICE.

The agency still classifies schools as sensitive locations where enforcement actions are generally prohibited. But immigrant rights groups point out that the designation has not stopped ICE agents from picking up parents as they drop their children off at school, nor has it prevented school disciplinarians from helping to build ICE cases.

And Education Secretary Betsy DeVos seemed to open the door to more such referrals last week when she initially told members of Congress that ICE enforcement decisions should be left to local officials, not established federal policy that prohibits it.

Later she clarified that she expected schools to comply with a 1982 Supreme Court decision that held that schools cannot deny undocumented students an education.

Schools are not, and should never become, immigration enforcement zones, Ms. DeVos said in a statement on Wednesday. Every child should feel safe going to school. It is unfortunate that those who seek to polarize and divide have intentionally tried to misrepresent my position on this issue to cause unnecessary fear for students and families.

But as she offered that reassurance, Ms. DeVos moved toward rescinding an Obama-era policy document on student discipline that could make undocumented students vulnerable. That 2014 policy encouraged schools to revise discipline policies that disproportionately kicked students of color out of school.

Data shows that students of color are disproportionately arrested at school, and advocates and educators contend that schools will increasingly rely on law enforcement to manage disciplinary issues if the guidance is rescinded.

In Houston, Mr. Rivera-Sarmiento’s run-in with the law still divides the community.

Some remain convinced that Mr. Rivera-Sarmiento’s status does not exempt him from criminal and immigration laws. Others believe the district unfairly subjected him to them.

Mr. Rivera-Sarmiento said he was arrested at his school after he defended himself against an attack from a schoolmate. She had teased him incessantly, he and his lawyer said, on this day calling him a wetback before throwing a bottle of Gatorade at him.

He pushed her down on the ground before running across the street to flee the area. When he returned to the school’s campus a few minutes later, he approached the school police officer to report what had happened. He was hoping for help, he said, but was escorted to the principal’s office in handcuffs. He was charged with misdemeanor assault.

The officer took him to the county jail, run by the Harris County Sheriff’s Office, which is required by state law to cooperate with immigration enforcement. There, he was flagged during booking proceedings as being in the country illegally. Mr. Rivera-Sarmiento, who came to the United States in 2013, had a pending deportation order.

As Mr. Rivera-Sarmiento bounced around three detention centers, students, teachers and advocates held demonstrations, circulated petitions and had fund-raisers to protest his detainment. Mr. Rivera-Sarmiento’s plight even caught the attention of Hollywood, where the actress Alyssa Milano signed and publicized a petition with the hashtag #FreeDennis.

Students in the Stephen F. Austin High School community, where 93 percent of students are Hispanic, argued that Mr. Rivera-Sarmiento was also a victim, and that school officials had failed to take into consideration the consequences of an unjustified arrest.

It really raised awareness among our students that this could be any of them, said Cortez Downey, a college counselor at the school. Already, we have a lot of students in this political climate who wonder if going to school is going to be a waste.

The Houston Independent School District has defended its handling of the episode.

In a statement, the district emphasized that Mr. Rivera-Sarmiento had been accused of an assaultive offense. It added that an incident report said that he had punched his victim in the head, a detail that has been disputed, and that she was taken to a hospital for unspecified injuries. District officials said that they did not report Mr. Rivera-Sarmiento to ICE and have not used district resources to assist in deportation actions.

Our superintendent and administration remain steadfast in the district’s commitment to educating every student regardless of their immigration status, the statement said. Students are and will continue to be safe in our classrooms.

But Mr. Rivera-Sarmiento’s lawyer maintains that the district fell short.

Immigrants have the right to go to school, and schools have the responsibility to take that into account in their policies, said his lawyer, Brandon Roche. The egregious part is that, especially in a place like Houston, they don’t seem to have contemplated this happening.

Mr. Rivera-Sarmiento was released from ICE detention on April 4, on a $2,500 bond.

Austin High School’s staff, including its principal, vouched in letters that Mr. Rivera-Sarmiento was a good student with no disciplinary issues and needed to be in school.

Mr. Downey said he was stunned when he learned of the arrest. He had met Mr. Rivera-Sarmiento, whom he described as timid, after he was reviewing a list of potentially college-bound students last year and realized that one with a 3.4 grade-point average had not applied to college. Mr. Rivera-Sarmiento went on to secure three acceptances.

There’s a lot that gets lost in the ‘I’m just doing my job’ shuffle, Mr. Downey said. And we realize what that means now.

Upon his return to school, Mr. Rivera-Sarmiento was welcomed with hugs. Sitting at his home after his first day back, he maintained that he loved school, that it was the only place where he felt he could be himself.

I didn’t mean for any of this to happen; I just tried to protect myself, he said. But they say they have to protect the country, and this is not my country. I respect that.

Mr. Rivera-Sarmiento is awaiting a hearing date for his immigration case, where his lawyer will seek asylum. Until then, he plans to enroll in college – the first in his family to do so. 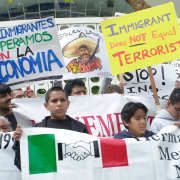 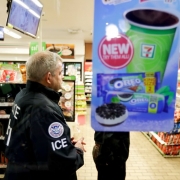 Trump’s claim that U.S. is only country with ‘thousands’ of immigration judges

Listen to ‘The Daily’: The Truth Behind #WhereAreTheChildren

Coming to America Scroll to top