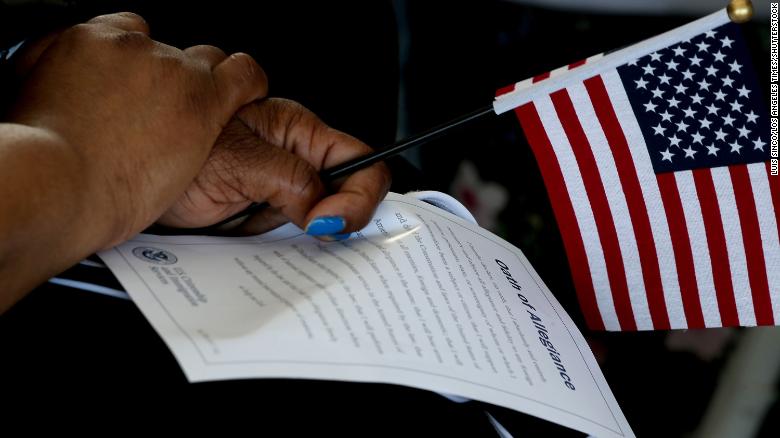 An immigrant holds a flag and the Oath of Allegiance during a US ceremony for naturalized citizens aboard the battleship USS Iowa in the Port of Los Angeles on Thursday, July 1, 2021.

(CNN)The Biden administration is introducing an unprecedented effort to encourage eligible immigrants to apply for US citizenship, according to a US Citizenship and Immigration Services official.

The effort stems from one of President Joe Biden’s early executive orders that called on federal agencies to develop “welcoming strategies that promote integration, inclusion, and citizenship.” Citizenship and Immigration Services — an agency within the Department of Homeland Security — will release its strategy, a copy of which was shared with CNN, on Friday.
“The idea is to find a whole-of-government way to reach out to people who are able to naturalize,” the Citizenship and Immigration Services official said, adding that there are 9 million people in the US who are lawful permanent residents who may be eligible to apply for citizenship.
That includes, for example, holding naturalization ceremonies at national parks to raise awareness, partnering with the US Postal Service to display promotional posters at Postal Service facilities about becoming a US citizen, and engaging with the Department of Veterans Affairs and veteran service organizations to find ways to educate service members and veterans on citizenship, according to the strategy, titled “Interagency Strategy for Promoting Naturalization.”
Biden has sought to strike a different tone from that the previous administration on immigration, underscoring the contributions immigrants make to society and moving away from anti-immigrant rhetoric.
Over the course of his presidency, Donald Trump tried to curtail legal immigration and doubled down on citizenship, teasing an end to birthright citizenship and attempting to include a citizenship question on the census. The Trump administration also revised the naturalization exam, a crucial step on an immigrant’s path toward US citizenship, a move that stood to make the test more difficult. Biden rolled back those changes.
Enter your email to sign up for CNN’s “What Matters” Newsletter.
“close dialog”
Previous administrations have promoted naturalization, the Citizenship and Immigration Services official told CNN, but the forthcoming strategy by the Biden administration tasks additional agencies to work with USCIS to have broader outreach.
“USCIS remains committed to empowering immigrants to pursue citizenship along with the rights and opportunities that come with it,” USCIS acting Director Tracy Renaud said in a statement to CNN. “There is no greater testament to the strength of America than our willingness to encourage others to join us as U.S. citizens as we work together to build a more perfect union.”
“Becoming a United States citizen is a tremendous privilege,” said Homeland Security Secretary Alejandro N. Mayorkas. “New citizens, strengthened with the power and responsibilities that American citizenship brings, make our Nation better. This strategy will ensure that aspiring citizens are able to pursue naturalization through a clear and coordinated process.”
Biden will participate in a naturalization ceremony on Friday. It will be among more than 100 such ceremonies scheduled between June 30 and July 7 to welcome more than 9,400 new citizens.
Earlier this year, Biden recorded a video that is played at naturalization ceremonies in which he thanks the new US citizens for choosing the United States and invokes his own ancestors who emigrated from Ireland.
“I want to thank you for choosing us and believing that America is worthy of your aspirations,” Biden says in the video.
“You all have one thing in common: courage. The courage it takes to sacrifice and make this journey. The courage to leave your homes, your lives, your loved ones, and come to a nation that is more than just a place, but rather an idea,” he says.
“Today you’ve earned a new title equal to that of an American president, the title I’m most proud of: citizen. Citizen of the United States of America,” he adds. “Welcome, my friends. Welcome my fellow Americans, welcome.”
It’s a tradition for US presidents to record messages for the hundreds of naturalization ceremonies that occur around the country each year. Many of those in-person ceremonies have been altered during the pandemic.
by2021, Border and Path, CNN, Citizenship, Immigration Policy, July 2021, Legal and Judicial, News, Priscilla Alvarez/inLEGAL & JUDICIAL, News, Policy & Enforcement

The Ideology of the Border

Cruelty has long been a central part of US politics and who’s defined... Scroll to top