Horrific stories continue to emerge as a result of the Trump administration’s zero tolerance immigration policy, which calls for both the prosecution of all people who attempt to illegally enter the country and in many cases long-term separation from the children they bring with them. The crackdown has led to widespread confusion and chaos as immigrants attempt to contact and locate relatives. This week, a tweet from Alex Gil, a faculty member at Columbia, highlighted what he called textures of the national horror: In the absence of information, family members and friends are turning to the public Google and Facebook profiles of detention centers in a desperate attempt to navigate the opaque regulations of ICE detention centers and share what they’ve been through. The ratings and reviews of these facilities paint a vivid picture of what life has been like both inside these centers and for relatives on the outside attempting to get information about their loved ones.

Many posts paint a picture of a capricious maze in which family members, many of whom appear to speak minimal English, feel confused and powerless, searching in vain for legal and research help or basic assistance with things like money transfers or phone calls. Here’s one anonymous comment, translated from the Spanish, on the Google page for IAH Secure Adult Detention Center in Livingston, Texas:

My husband has been there for almost a month and has not been able to call Central America. What can I do to found out how to talk to him? Our baby daughter is sick. Help

Some reviews warn others about particularly cruel employees. Anthony Flores wrote a year ago of the Adelanto ICE Processing Center in Adelanto, California, (translated from the Spanish):

There is an American guard, a very bad person, who gets angry when children want to touch their parents. It seems like she doesn’t understand that they are children â€¦

Wendy Lujan, whose husband was also detained at Adelanto, wrote five months ago:

I have been trying to get the word out about how inhumane Adelanto ICE Processing Center on the west side has been. My husband is currently set there and he has informed me about the way they have not been given medical treatment when needed, it goes for so long that by the time they are given treatment the illness has gotten really bad and the rest of the inmates have been put in quarantine. They are also not been fed at times till 7 PM, and the excuse they give them is that they forgot. They don’t give them toilet paper and when they ask officers for paper one of the officer’s response was What do I look like the toilet paper man. â€¦ Please help get the word out. They have no right to be treating immigrants as if they are not worth anything.

Seven months ago, Josefina Hernandez wrote that the detainees at the same center had been on lockdown for at least two months, and weren’t allowed to receive books or make phone calls:

ARE THEY ALOWED TO TAKE AWAY THE VISITING DAYS FROM 3 TO 1. ARE THEY ALLOWED TO CHANGE VISITATION HOURS FROM ONE MINUTE TO THE NEXT â€¦ They are detainees not inmates â€¦ They should be treated â€¦ like adults not animals â€¦ This is not a good place.

In many of these reviews, the idea of detainees treated like animals or inmates before being charged with any crime is a common theme. Overall, the prevailing sense is one of desperate confusion and bureaucratic obfuscation-baffling paperwork, fickle visiting hours, muddled procedures that leave detainees and their family members feeling like they are caught within an impossible maze. Two months ago, Michael Baumert wrote of the Broward Transitional Center in Pompano Beach, Florida, which had detained his fiancee: It’s not good to treat people like this when all they want is a better life than the place they came from. 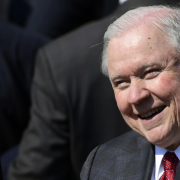 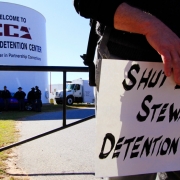 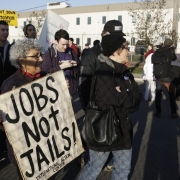 How the Supreme Court is Expanding the Immigrant Detention System 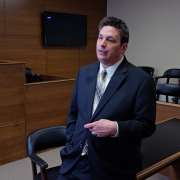 The Damage Is Done

Report: Nearly Half of Funding for Child Migrant Care Went to Shelters With... Scroll to top