â€¢ Last week’s presidential executive order declaring that the administration would seek to keep undocumented border-crossing families together whenever possible seems to have resulted in at least a temporary halt in separations. The order seemed to contradict itself by insisting that a zero-tolerance policy of criminally prosecuting every adult border crosser would continue; the administration instituted that policy in the first place in part so that families would be separated, as children by law can’t be held in criminal jails. But given that local activism and news organizations like the Texas Civil Rights Project and the Houston Chronicle haven’t reported any new criminal border-crossing prosecutions in recent days-and given that the Customs and Border Protection agency says it’s stopped making criminal referrals-it looks like prosecutions have indeed been halted while the Defense Departmentand other agencies prepare facilities that are equipped to hold criminal suspects with their families. In the meantime, new undocumented border crossers are presumably being put into civil detention from which they could conceivably be released under the Flores court settlement governing the U.S.’s treatment of undocumented minors.

The president is tweeting that he hates this policy and would prefer one of instant deportation, which is problematic not just from a political perspective but for legal reasons I’ll get into later.

The Department of Justice has asked a federal judge in California to modify Flores to allow for indefinite family detention; the judge is now awaiting a response from immigrants’ rights attorneys representing the other side of the issue.

Another California federal judge appears to be on the verge of issuing a ruling in a case that the ACLU filed on behalf of parents recently separated from their children. The judge could conceivably order the government to reunite all families that were separated before last week’s executive order. But â€¦

â€¢ The Department of Homeland Security has already announced its own plan to reunite what it says are the 2,000-plus children that it has already separated, and the plan is fraught with problems. For one, some children who were taken have already been processed into the foster care and state shelter systems in locations as far away as Michigan and Maryland. Children in the system are sometimes too young to know their parents’ full names (Michigan has reported receiving a 3-month-old baby), and parents who have attempted to find out where their children are have found that the Department of Health and Human Services officials who are supposed to be tracking them are too overloaded to answer. Some parents who are already back in their countries of origin, moreover, say they agreed to be deported but were not reunited with their children before it happened. And there’s a more overarching problem, which is that the government is officially saying it will only help parents be reunited with their kids if the parents agree to be deported. An unknown but seemingly significant portion of those parents are making potentially valid legal claims that they are fleeing potential violent deaths and deserve asylum-which means the Trump administration has essentially kidnapped their children as leverage in order to convince them to be deported back into danger.

For some context on that last point, a 2016 Yale Law School analysis concluded that indefinitely detaining valid asylum claimants, subjecting them to punitive measures for seeking asylum, and ignoring their potentially valid claims via an expedited removal process constitute a violation of both U.S. and international law. The International Criminal Court, meanwhile, defines the systemic removal of a given civilian population via deportation or forcible transfer as a crime against humanity. It’s hard to think of anything more punitive than taking someone’s children, and refugees with valid asylum claims who are deported by a president who’s accused them of perpetrating a criminal infestation (and who has made various derogatory comments about their racial group) would certainly seem to qualify as a targeted civilian population. In other words, family separation is out, but it sounds like U.S.-style ethnic cleansing is in. 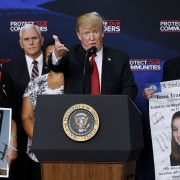 After 40 Days Apart and a Missed Flight, a Migrant Family Reunites

Reuniting families who were separated at the border could take months, federal officials warn
0 replies

For a 6-year-old snared in the immigration maze, a memorized phone number proves... Scroll to top