The Department of Homeland Security does not plan to extend an October 5 deadline for Deferred Action for Childhood Arrivals recipients to renew their status, according to a Justice Department attorney who spoke at a hearing in federal court Tuesday.

Deputy Assistant Attorney General for the Justice Department Brett Shumate told a federal judge that the government did not plan to extend the deadline during a hearing in an ongoing lawsuit challenging the government’s decision to end the program. US District Judge Nicholas Garaufis suggested at a previous hearing that DHS extend the deadline while a legislative or executive solution was still being worked out.
The lawsuit is one of several challenging the legality of the government’s decision to end the DACA program across the country. Before the judge started listening to arguments from either side in the case, he has already expressed repeated concern about the upcoming October 5 deadline.
While DHS stopped accepting new DACA applications when President Donald Trump announced the end of the program on September 5 (with a six-month window for Congress to act), existing DACA recipients with permits that expire on or before March 5, 2018 are still eligible to apply for renewal, as long as they submit those applications by October 5.
The administration initially announced this plan to continue accepting applications for permit renewal in order to give Congress time to act before any currently protected individuals lose their ability to work, study and live without fear in the US.
Judge Garaufis wanted DHS to extend the deadline so that people who are eligible for renewal had enough time to submit those applications, and no members of the program would be in danger of immediate deportation. When Shumate said the government did not plan to do so, Garaufis was shocked.
“I’ve worked in every branch of government … and I’ve never seen a circumstance like this,” Garaufis said in court.
He questioned the government’s decision to both wind down the program and wait for a legislative solution from Congress at the same time, stating, “what I want to know is what’s the hurry.”
He also noted that not just the 800,000 people who currently participate in the DACA program would be impacted by the program’s abrupt end, but that millions, including family, friends and colleagues of DACA recipients, would feel its effects.
“You can’t come into court and espouse a position that’s heartless,” Garaufis said in court. “It’s unacceptable to me as a human being and as a person. I’m glad I was born in Paterson, New Jersey and not Mexico City.”
Read more: www.cnn.com/2017/09/26/politics/daca-hearing-deadline/index.html
September 27, 2017/0 Comments/by unitedwestay
http://move.unitedwestay.org/wp-content/uploads/2020/01/logo_UWS_trans.png 0 0 unitedwestay http://move.unitedwestay.org/wp-content/uploads/2020/01/logo_UWS_trans.png unitedwestay2017-09-27 16:40:592017-09-27 16:40:59DHS will not extend DACA renewal deadline, attorney says in court 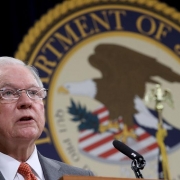 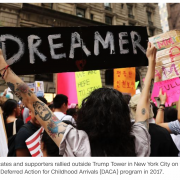 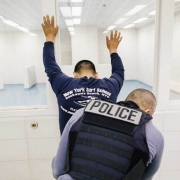 Lessons for Donald Trump in the Supreme Court’s DACA Order

Why this DACA recipient won’t be extending her protected status, but says...

For Some Black Immigrants, Life In Limbo Scroll to top