Around 3 a.m. on Thanksgiving morning, Gabriela*, a 24-year old U.S. citizen of Mexican heritage, was peacefully rocking her 12-hour-old son to sleep. She turned, with tears welling in her eyes and pleaded, What did we do to deserve this?

Gabriela’s husband, Ernesto*, an undocumented immigrant, had been arrested 11 days earlier for a traffic violation. That morning, he was buying diapers and onesies, and by that night – although he had lived in the U.S. since the age of 3 – he was facing detention, deportation and indefinite separation from his wife and young children.

The increasingly omnipresent U.S. immigration system is shattering families and leaving pregnant women without support during a critical and highly vulnerable time of their lives.

We met Gabriela when she called an immigrants’ rights organization soon after Ernesto was arrested. She was well aware that police often collaborate with Immigration and Customs Enforcement, and that something as simple as running a red light could lead to deportation. Gabriela depended heavily on Ernesto, both for the income he provided and for the birth support he had promised to provide. His deportation meant Gabriela, who had no job, would have to pay rent in three weeks. It also meant she had no one to take her to the hospital, and had to care for her two young daughters alone as she recovered from an invasive Cesarean delivery.

While her family and friends could theoretically step in and support her in Ernesto’s absence, the reality of immigration enforcement is that community members often withdraw from affected families for fear of being similarly targeted by immigration forces. Because one of us, Elizabeth, is a trained birth doula with experience supporting women from diverse backgrounds, the immigrants’ rights organization connected her to Gabriela.

Ernesto’s deportation meant Gabriela had no one to take her to the hospital, and had to care for her two young daughters alone as she recovered from a Cesarean delivery.

Elizabeth had previously attended births in rural Uganda, where there was no running water or electricity. In the U.S., she typically focuses on women who are low-income, single or struggling with mental illness, including addiction and PTSD. She was not new to the hardships of less-than-ideal pregnancy and childbirth, but nothing had prepared her for this. Overnight, the U.S. immigration system had turned Gabriela into a pregnant single mother, a sole breadwinner, and – for all intents and purposes – a traumatized widow. When she spoke of Ernesto, it was always in the past tense; she assumed she and her children would never see him again.

After learning of Gabriela’s situation, Elizabeth reached out to fellow doulas and public health colleagues, along with friends from her own personal network who were themselves parents. Within a week, they had collected food, clothing, diapers and a crib; within a month, they had raised enough money to pay her family’s rent.

When the day of Gabriela’s scheduled C-section arrived, Elizabeth and another doula escorted her to the hospital, and Elizabeth spent the following night and day at her bedside. The birth, though painful, was uneventful, and the newborn gave Gabriela something to focus on. She tended to him with the easy vigilance of an experienced, loving mother â€• but as soon as he was asleep in the bassinet, her thoughts would wander. In the dark hospital room, she reminisced about her early days with Ernesto and shared her fears of a life without him.

Both issues are becoming more and more common as immigration enforcement intensifies. Gabriela’s brother-in-law was also deported while Gabriela’s sister was pregnant with their first child. Ernesto’s cousin, who also had a newborn, was about to move to Mexico, where her own husband had been deported shortly before their baby was born. A month after Gabriela gave birth, Elizabeth met another relative, who was 6 months pregnant and showing warning signs of miscarriage. Her husband had also been arrested and was facing deportation. And once Elizabeth shared Gabriela’s story in a public lecture, the emails started pouring in: friends and colleagues across the country wanted to know if there were immigration doulas in their areas.

Pregnancy is already a high-risk time for women’s health, and in-utero experiences can affect a child’s health and development well into adulthood. The moments surrounding childbirth are also a crucial time for bonding between the baby and parents. While Gabriela’s son was healthy and content, she was never able to produce breast milk, which she attributed to her stress level. One minute, she would be smiling and laughing at the baby; the next, she would fall silent, her mind in a dark and distant place. For days on end, we tried to reach Ernesto by phone, but were thwarted by exorbitantly high costs and the general tendency of inmates to disappear within jail and detention systems. This family was robbed of a pivotal moment for development and bonding, an opportunity that can never be recovered.

Some, including our president, say that undocumented immigrants are not worthy of basic respect explicitly because they are animals. Others argue that by entering a country illegally, one gives up the rights to family and freedom.

Such arguments ignore human rights, which transcend national boundaries and protect refugees and migrants. They further a eugenic, racist agenda under the guise of law and order. Dehumanizing policies and rhetoric have long been used to enable violence against specific groups without guilt or consequence. Language of animalhood was used to justify genocide in countries including Germany and Rwanda, and it has also been applied to coercive population control of nonwhite populations around the world. For example, the U.S. eugenics program, which forcibly sterilized 60,000 so-called unfit Americans between 1900 to 1970, disproportionately targeted Latinx communities (among others) and compared them to hypersexual animals.

Sudden single motherhood and dehumanizing language are, of course, only two manifestations of a much larger system of immigration and reproductive injustice. Children are being separated from their parents at the border, pregnant undocumented women are being detained and anti-immigration raids are generating shockwaves so powerful that they traumatize communities and cause negative birth outcomes. Our immigration system has been weaponized to disrupt and destroy undesirable reproduction and family-making.

Elizabeth will never forget how each of the nurses cooed at Gabriela’s son. One even confessed that they had collectively voted him the prettiest baby on the floor. Yet at every turn, Gabriela and her family were met with resistance and loathing by U.S. policies, institutions and discourse determined to tear them apart. On Gabriela’s final morning at the hospital, Gabriela and Elizabeth watched the news together as she held her baby – the prettiest on the floor – in her arms. It wasn’t long until a newscaster began talking about anchor babies, and Elizabeth quickly changed the channel. But Gabriela had already heard it.

In her eyes, there was no hurt or anger, only resignation and weariness. She has long known that despite all the cooing and smiling, this country sees her family as undesirable, as less than human, as no family at all.

*Name has been changed. 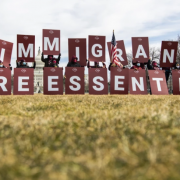 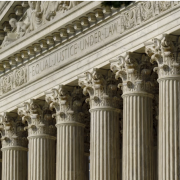 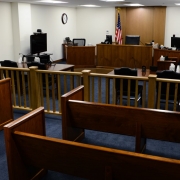 A New York courtroom gave every detained immigrant a lawyer. The results were staggering.