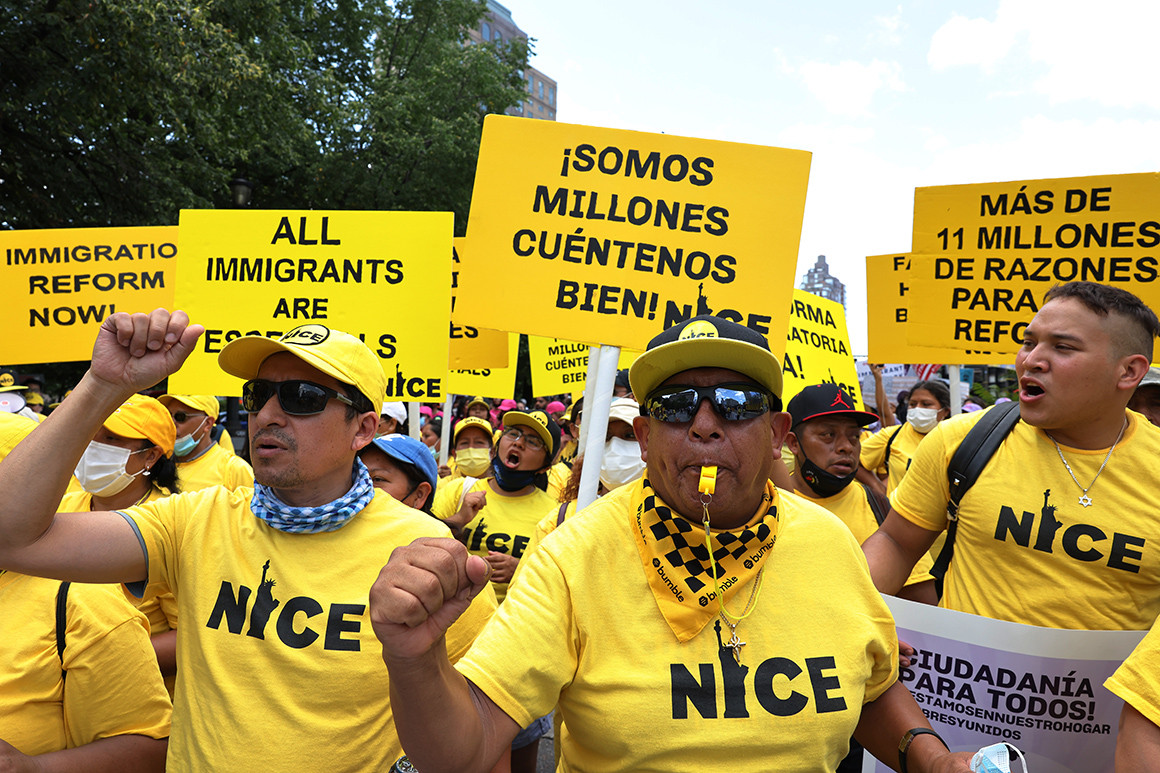 With bipartisan immigration talks stalled, the White House and congressional Democrats are pushing to add a path to legal residency for 8 million immigrants to their sprawling social spending plan this fall. In order to steer that help for Dreamers, essential workers and those with Temporary Protected Status past a filibuster, though, the party has to win over the Senate parliamentarian, the chamber’s non-partisan rules arbiter.

In order to gain the parliamentarian’s approval and get immigration attached to the party-line spending plan, Democrats essentially need to demonstrate that their proposal would have a significant effect on federal spending, revenues or debt. Democrats assert that offering a pathway to legal status would make those included eligible for certain federal benefits — and thus impact the budget. They also claim precedent is on their side, highlighting a 2005 GOP-led bill that addressed immigration as part of the so-called budget reconciliation process, the same path they’re using this year to avoid the need for Republican votes.

Reaching a deal with Republicans on immigration is “at the best elusive and doesn’t seem to me that we can really get there,” said Sen. Bob Menendez (D-N.J.), who introduced President Joe Biden’s immigration reform bill earlier this year. “Reconciliation is our best chance: one because it’s must-pass, and two, because obviously we can do it with a majority vote.”

The Democratic plea to the parliamentarian — which could be decided as early as this week — is narrow and tries to use a longstanding talking point of immigration reform opponents against them: Extending legal status to new populations would cost the federal government billions. It’s also the party’s strongest remaining chance at progress before the midterms.

Democrats haven’t seen this promising an opportunity for major immigration reform, the sort that hasn’t passed Congress in 25 years, since the Senate’s “Gang of Eight” discussions in 2013. And they feel a new sense of urgency after a federal court ruled in July that the Obama-era Deferred Action for Childhood Arrivals program is unlawful and blocked the Biden administration from approving new applications. While the ruling didn’t immediately end the program, immigration lawyers and advocacy groups say it’s clear that DACA — and its protections for Dreamers, thousands of young immigrants brought to the U.S. as children — isn’t safe.

“We’ve always known that that was a temporary program, that was a temporary solution and what we need is a permanent solution,” said Marielena Hincapié, executive director of the National Immigration Law Center. “The Texas decision against DACA … even more so raises the urgency of why Congress must act right now.”

The Senate parliamentarian, a former immigration lawyer, heard arguments Friday from Republican and Democratic staff on the Judiciary and Budget Committees, as well as staffers from Senate leadership. Meanwhile, the House Judiciary Committee is holding a markup on the issue Monday.

Democrats’ central argument to the parliamentarian is that offering green cards to certain undocumented immigrants would unlock federal benefits for them, causing effects on the budget that they say are a substantial, direct and intended result. The Congressional Budget Office’s preliminary estimate is that the immigration language in the party’s forthcoming social spending bill would increase budget deficits by $139.6 billion over a 10-year period, Democratic aides said.

Republicans on the Senate Judiciary and Budget Committees did not provide specifics about their arguments, though the GOP is broadly countering that the immigration reform planks of the bill are extraneous and shouldn’t proceed with a simple-majority Senate vote. Sen. John Cornyn (R-Texas), a member of the Judiciary Committee, tweeted Friday that Democrats “never fail to fail when it comes to immigration reform” and “persist in pursuing partisan bills rather than bipartisan immigration reform.”

With respect to the deficit increases their proposal would bring, Senate Democrats often cite a report from the liberal Center for American Progress that found that offering undocumented immigrants a pathway to citizenship would boost the U.S. GDP by $1.5 trillion, create 400,000 jobs and raise wages over 10 years. In addition, they say that offering green cards would raise recipients’ current tax contributions and lead to more processing fees.

“There’s a lot of applications, there’s a lot of fees coming into the federal government to be processed by federal employees … so we think it’s more than appropriate,” said Sen. Alex Padilla (D-Calif.), who added that without contributions from immigrants, “California would not be the fifth-largest economy in the world.”

If approved by the parliamentarian, the immigration provisions being discussed would apply to Dreamers, Temporary Protected Status holders, farmworkers and essential workers during the pandemic.

Democratic aides have also sought to clarify that their efforts involve providing a pathway to legal status — not to citizenship. But under existing U.S. immigration law, those who end up qualifying to apply for green cards would be able to apply for citizenship after five years if they meet certain requirements.

A ruling in Democrats’ favor is no guarantee. Earlier this year, the parliamentarian rejected the party’s proposal to raise the minimum wage to $15 an hour using the reconciliation process. However, Democrats and immigrant advocates argue the circumstances are different this time, given that minimum wage is not solely tied to the federal government while immigration law is.

In interviews, Democratic lawmakers declined to specify what their back-up plan would be if the parliamentarian rules against them on immigration, or whether they’d support voting to overrule her. But lawmakers involved in the discussions have already made clear they intend to contest the parliamentarian’s decision if she offers guidance that Democrats have not met the standards to include a path to legal status in the package.

“We have a strategy to go back to the parliamentarian repeatedly if there are any disagreements in the first proposal,” said Rep. Raul Ruiz (D-Calif.), chair of the Congressional Hispanic Caucus, who underscored that Democrats see this as “possibly the only viable way this Congress [has] to get it done.”

Democrats have been plotting their reconciliation strategy for months. Senate Majority Leader Chuck Schumer told members of the Hispanic Caucus back in February that Democrats would explore the option and he met with them again recently to discuss the game plan, lawmakers and aides familiar with the meeting said.

Biden and White House officials are publicly backing the effort. Biden first expressed a willingness in April to make a more proactive case for the economic benefits of immigration.

Outside groups, like the Service Employees International Union, have also been coordinating with the Hill on their strategy.

The union’s president, Mary Kay Henry, said that senators “are more clear about the need to create this pathway to citizenship than I’ve heard in any time in my life” and projected optimism that “the parliamentarian is going to be armed with the arguments that she needs to allow the pathways to be reconciled.”

And after months of discussions with the White House and Democratic leadership on the Hill, immigrant advocates are feeling confident that the coordination and united message will prevail.

“This really feels like our big moment and our best moment because of all the work we’ve done. … It’s long overdue,” said Alida Garcia, a former senior migration adviser to Biden and vice president of advocacy at FWD.us. “Right now, it’s full-steam ahead.”

Laura Barrón-López contributed to this report.

Trump May Be Gone, But the Fight Against His Border Wall Goes On

Democrats’ immigration hopes rest on a decision by the Senate parliamenta... Scroll to top