Decline in Immigration Threatens Growth of Regions on the Rise

Crowds heading toward the Thursday night farmers’ market in Bentonville, Ark., in June.Credit…

BENTONVILLE, Ark. — Northwest Arkansas, where the Ozark Mountains rise, used to be a sleepy corner of the state, its only claim to fame that Sam Walton opened a five-and-dime in Bentonville and the first Walmart store in nearby Rogers — outposts that became the seeds of a global retail empire. The founders of Tyson Foods and J.B. Hunt got their start in the same region, and a network of software companies moved in later to meet big business’s insatiable appetite for new technology.

But there were not enough locals to build the burgeoning economy. Answering the call to work in poultry production, trucking, construction and computer programming were legions of immigrants from El Salvador, the Marshall Islands, Mexico, India and elsewhere.

With tens of thousands of immigrants helping to catalyze its development, Northwest Arkansas has emerged as one of the country’s fastest-growing metropolitan areas. Brimming with optimism, it is wooing newcomers with cheaper housing, a world-class art museum, upscale restaurants and forested bike trails. 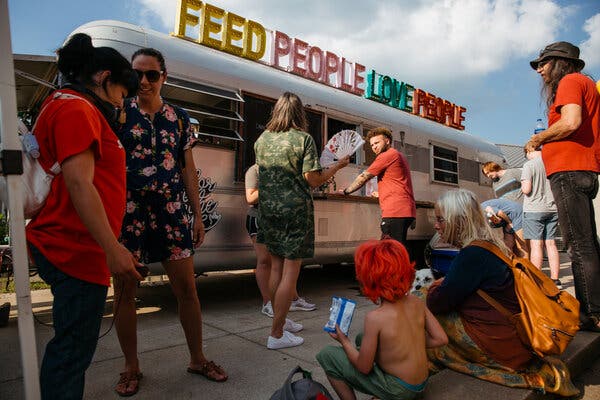 But as much of the U.S. economy comes back from the coronavirus pandemic, the decades-long influx of immigrants that fueled such enormous expansion in places like Arkansas has begun to stall, posing challenges to the region and the country at large.

The United States over the past 10 years experienced the slowest population growth rate in eight decades, according to the 2020 census, because of plunging fertility rates and shrinking immigration.

The surge of unauthorized migrants from Mexico and Central America is testing the Biden administration, but images are deceptive: A vast majority of the single adults crossing the border to find work are quickly deported. And the flow of legal immigrants, whom Northwest Arkansas companies also heavily rely on, has fallen precipitously since the Trump administration clamped down on all kinds of immigration with the belief that it was displacing American workers.

Now, business leaders are hoping that President Biden will make good on his pledge to overhaul the immigration system and establish a legal pipeline for foreign workers to take jobs in Northwest Arkansas and other places that depend on them.

The U.S. Chamber of Commerce has called on Congress and the White House to double the number of visas for high-skilled temporary workers under the H-1B program and also for seasonal workers in sectors like agriculture and meat production, another economic mainstay in this part of the country. 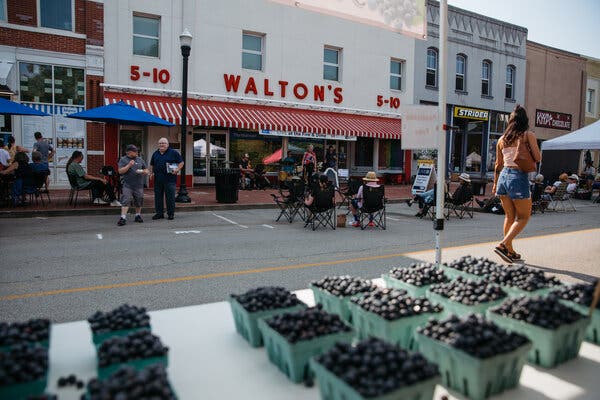 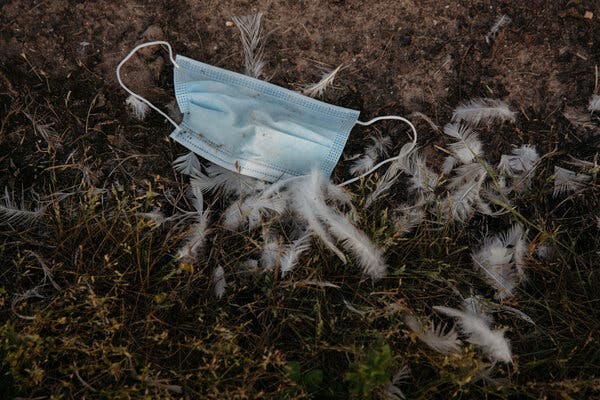 Lifting the ceiling on H-1B visas has been contentious, with some labor groups arguing that foreign workers imported from places like India and China displace Americans and drive down wages.

So far, Mr. Biden has concentrated on the surge of unauthorized immigrants at the southwestern border, and has not advanced measures to bring large numbers of new workers into the country.

“In addition to securing the border, we should be focusing on how to secure avenues for more legal immigration,” said Neil Bradley, chief policy officer for the U.S. Chamber of Commerce. “For a whole host of communities all across the United States, immigration will determine whether the local economy will continue to grow for those moving there and the residents who have called that place home for decades.”

The decline in immigration is an important factor in the long-term decline in population growth that demographers are forecasting in the United States.

“When you are not going to have enough births — and deaths will continue with an aging population — the only variable that can make an appreciable difference is immigration,” said Joseph Chamie, a demographer who formerly headed the United Nations division on population.

Areas such as Northwest Arkansas can “forget about” continued growth, Mr. Chamie said, without the steady arrival of new immigrants.

The Census Bureau had projected that the number of immigrants in the United States would increase by 1.4 million from July 2017 to July 2019. Instead, it climbed by a net 400,000.

In Northwest Arkansas, 1,750 foreign newcomers arrived in 2016, accounting for more than 14 percent of all new residents, according to the census. In 2019, only 750 new immigrants settled in the area.

The drop comes as employers in the region — like many across the country — are also facing an intense labor shortage from the pandemic. Home builders, hospitals and technology companies are all struggling to find workers. Poultry processors have been offering higher hourly rates as well as attendance, referral and sign-on bonuses.

Tyson Foods and J.B. Hunt, a transportation and logistics giant, are posting for workers to take unfilled tech jobs.

Jared Smith, the chief executive of Kitestring, a boutique technology company that serves retailers, has been trying for months to fill 30 jobs.

The firm pays six-figure salaries for software engineers. “The battle for talent has become even fiercer,” he said.

About 35 percent of his 175 employees are on H-1B visas. “If I were to depend exclusively on U.S. citizens, it’s hard to imagine I would grow,” he said. 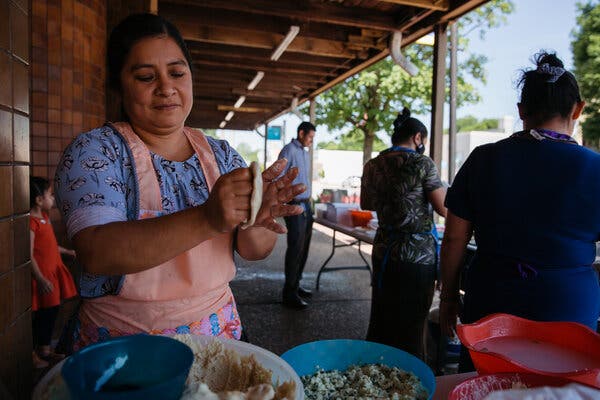 Immigrants have transformed the area not just culturally, but politically as well.

Springdale voters in November sent the first Latino to the City Council, Kevin Flores, the son of a poultry worker; Bentonville elected the first Indian American, Gayatri Agnew, to the City Council. Even in the state’s Republican-majority legislature, there has been recognition of the role of immigrant labor. This year the General Assembly passed a bill to enable undocumented immigrants who were brought to the country as children, often known as “Dreamers,” to obtain any professional or occupational license, one of the most liberal such laws in the country.

“We have a fast-growing economy, and we are concerned about a labor shortage,” said Nelson Peacock, who heads the Northwest Arkansas Council, founded by major employers in the region to promote economic development. “We need workers of all skill levels, and immigrants are an important part of the equation.”

Baaju Chepuri remembers vividly the Bentonville he encountered in 2008, when he accepted a job to work as a software engineer for Walmart.

On the drive into town from the regional airport, he felt like a city boy lost in the woods. The Indian community was minuscule. To stock up on Indian groceries, eat at Indian restaurants and watch Bollywood movies, they journeyed to Kansas City, Mo., or Tulsa, Okla.

“This place was 20 percent of what it is today,” Mr. Chepuri said. “There was literally nothing to do.”

Bentonville’s Indian population grew by 361 percent between 2010 and 2019. By then, there were Indian cafes and supermarkets dotting strip malls. A gleaming Hindu temple opened for worship in 2012, and the city is erecting two cricket pitches for the 25-team local league.

Less than 20 miles south of Bentonville along Interstate 49, immigrants also transformed Springdale, the center of the state’s multibillion-dollar poultry industry, as tens of thousands of Latin Americans, both legal residents and undocumented, arrived.

The immigrants have not found a universal welcome.

Unease prevails among some longtime residents, like Debbie Eden, a business owner in Springdale. “Many immigrants are hard workers,” she said, “but they come in and undercut you working for less money.”

For the immigrants who have arrived, the region’s boom has led to ample employment.

Ershad Ismail Gani, who came five years ago from India and now works at Kitestring developing software that runs cash registers at Sam’s Club and Walmart, said that several of his friends have been hired away by other employers scrambling for workers, and that he had also been approached.

Wages have been high enough that he and his wife have welcomed a daughter into their family and bought a four-bedroom house with a home theater. “It’s really amazing how many jobs are available,” Mr. Gani said. “Everywhere I turn there are opportunities.”

In Springdale, Yanira Umana, a wing cutter at a Simmons Foods turkey plant who is an immigrant from El Salvador, showed off the tidy three-bedroom brick house — with a flower garden in full bloom — that she recently acquired.

“I achieved all this working with chicken and turkey,” said Ms. Umana, a single mother of two.

But she is raising her American daughters, 9 and 12, to have loftier ambitions. “Day after day, I tell them this is not the life I want for you,” she said.

Older immigrants, like American baby boomers, are not being replaced by their children. And while immigrants illegally crossing the southwestern border may be willing to take unforgiving jobs, they are not a hiring option for big-name companies like those in Northwest Arkansas.

When Marta Merlos of El Salvador moved there in 1995 to work on Tyson’s lines, her son, then in the first grade, was one of only 10 Latino children at Robert E. Lee Elementary.

Ms. Merlos, 61, who is now a U.S. citizen, still endures 12-hour shifts. The middle finger on her right hand is damaged, and she feels body aches at the end of each day.

But it has paid off, she said.

Her oldest son, Kevin Flores, joined the Marines, then went to college and became a lawyer. In November, with a campaign touting him as a product of the new, diverse Springdale, he became the first Latino elected to the City Council.

“The makeup of Northwest Arkansas has changed dramatically thanks to immigrants, and we are much better off because of them,” said Mr. Flores, 33, who arrived in the United States when he was 3 years old. “To keep flourishing, the region will need immigrants to continue moving here.”

Guatemala is key to Biden’s migrant policy. Its corruption is worsening.