Ghastly images and videos this week showed Border Patrol agents on horses, using their reins aggressively to intimidate Haitians, including small children, on the riverbank in Del Rio, Texas.

After flipping through the voter information guide that was mailed to my home a few weeks ago, I started counting up the pivotal elections I’ve witnessed firsthand but could not participate in. 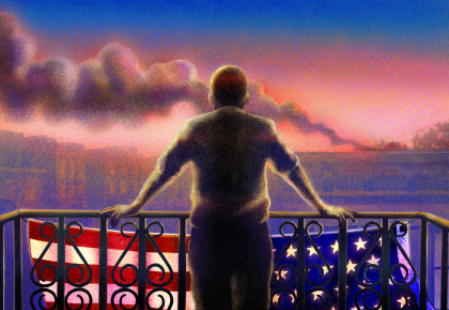 The most patriotic act I have ever witnessed anyone perform was what my father did on 9/11.

In the past week we have seen searing images and read heartbreaking media accounts of Afghans attempting to leave as the Taliban has rolled into Kabul and asserted control over the country. Americans owe vulnerable Afghans more than sympathy.

On this Independence Day, we will gather (finally!) with friends and family to celebrate our country and what it means to be American. But what that actually means continues to be the source of much debate.

Americans have a moral and economic imperative to pass the Citizenship for Essential Workers Act, which would provide a pathway to citizenship for the roughly 5 million people living here illegally who risked their lives on the COVID-19 front lines to keep the United States functioning.

April’s disappointing job numbers suggest the economy is not yet on a path to full recovery.

The last four years – really, the last decade – were beyond exhausting because of how saturated they were with xenophobia and anti-immigrant policies.

The Biden administration should avoid the Trump-era mistake of reducing the entirety of the U.S.-Mexico relationship to the single issue of immigration.

For most of the first 60 days of President Biden’s administration, his White House controlled the agenda and the national discussion. The team focused on the coronavirus pandemic, successfully accelerating the pace of vaccinations while muscling through Congress the nearly $2 trillion American Rescue Plan over united Republican opposition.

But Biden and his team now face what every administration eventually confronts: the unforeseen events that can disrupt the best-laid plans and choreography of a White House. The surge of undocumented immigrants at the U.S.-Mexico border has done just that — and amplified an issue that long has been a vulnerability for the Democrats.

Biden opened his administration determined to signal a shift from the immigration policies of his predecessor, Donald Trump. He signed a proclamation calling for a halt on construction of the border wall that was the former president’s pet project. He also made good on a campaign promise to propose legislation to rewrite the immigration laws, including an eventual pathway to citizenship for the more than 11 million immigrants who are here without documentation.

Then came the surge on the border, which included a substantial increase in the number of unaccompanied minors. Whether the more compassionate attitude of the new administration or other factors caused the influx is a matter of debate. Whatever the answer, the Biden administration has found itself with a humanitarian emergency and a political mess-in-the-making that it is ill-prepared to handle.

Administration officials have blamed the Trump administration for some of its problems, claiming they inherited a broken and punitive system. But they have come face-to-face with the issue that has long nettled many Democrats: What to do when someone crosses the border illegally? In other words, just how strictly should the law be enforced and what are the consequences of either doing or not doing so?

The issue of the border arose at the first Democratic presidential debate in June 2019, a two-night event held in Miami. On the first night, Julián Castro, the former housing secretary and former mayor of San Antonio, called for an end to criminal penalties for anyone crossing the border illegally, arguing that the violation should be reduced to a civil penalty.

On the second night, the Democrats on the stage were all asked to raise their hand if they supported Castro’s call to decriminalize the border. All but two immediately showed their support, but one who did not was Biden. He seemed to equivocate by not fully raising his hand.

Asked specifically where he stood on the question, he deflected. He said he would unite families and would also send billions of dollars in U.S. aid to countries in Central America as a way to improve conditions enough to discourage migration north.

In a follow-up question, he was asked: “Should someone who is here without documents, and that is his only offense, should that person be deported?” He responded by saying: “That person should not be the focus of deportation. We should fundamentally change the way we deal with things.”

Last week, in an interview with ABC’s George Stephanopoulos, Biden dismissed the idea that the surge of migration is a result of his more welcoming attitude, as some of them reportedly have told U.S. officials. Prompted by Stephanopoulos, he said, “I say quite clearly, ‘Don’t come,’?” adding, “?‘Don’t leave your town or city or community.’?”

Biden explained in the interview that the U.S. government would be setting up centers in these countries where asylum seekers could make their applications. That will take time. The government also is seeking help from Mexico to absorb some of the influx, with the administration agreeing to send millions of doses of coronavirus vaccines to Mexico. This is not being described as a quid pro quo.

The challenge for the administration is to show that it can strike a balance between a more compassionate and humane immigration policy at the border and a policy that deals firmly with those who violate the law — and one that, ultimately, discourages people, including asylum seekers, from coming here in overwhelming numbers.

But allies of the administration recognize the political risks of the moment.

Homeland Security Secretary Alejandro Mayorkas this past week said the country is on pace for the highest number of individuals crossing the border in 20 years. Administration officials say they are sending back non-asylum-seeking adults, following a public health order that was adopted by the previous administration during the pandemic. They also have sent back some families with children, although due to Mexico’s inability to handle these families near the border, a majority were allowed to remain in the country in February.

The administration is not sending back unaccompanied minors, and as of Thursday there were an estimated 14,000 in U.S. hands. The administration is trying to expedite the process of moving them from the custody of Customs and Border Protection officials and into the hands of the Department of Health and Human Services and, then, to the extent possible, to relocate them with families or sponsors in the United States.

Republicans, who have had no effective message to counter to the administration’s coronavirus relief package, have seized on the surge of migration to pummel Biden as favoring open borders. The administration is furiously working to prevent that from sticking. But this administration is also under pressure from the left to demonstrate that it is more humane than the Trump administration, and that has added to the pressure to deal as quickly and effectively as possible with the situation.

Biden has had little to say about the matter, and administration officials have, so far, not allowed reporters to get a firsthand look at conditions for the children in custody. Mayorkas visited the border with a bipartisan group of lawmakers Friday, but he took no reporters with him. The officials appear to want as little attention as possible focused on the problem as they scramble to create a system to humanely handle the children and relieve some of the growing political pressure.

On most of the issues around immigration, Democrats occupy the political high ground. Sizable majorities support a path to legal status for the 11 million undocumented immigrants in the country, and they also support a path to legal status or citizenship for the young people who were illegally brought to the United States as children, those known as “dreamers.” But on border issues, public opinion is in a different place.

Around the time that the Trump administration was dealing with a surge on the border and had instituted a policy that separated children, The Washington Post and the Schar School at George Mason University examined attitudes on a range of immigration issues. Then, a plurality of Americans said they trusted Democrats in Congress more than Trump to deal with the overall issue of immigration. But a plurality said they trusted Trump more than congressional Democrats to deal with security at the border.

The humanitarian situation at the border and the prospect of a 20-year high in people crossing into the United States will affect the climate for legislative action on immigration. The House last week passed a bill that would provide a path to legalization for the dreamers and some others, but only nine Republicans supported the measure. In the Senate, Republicans are demanding provisions to deal with border security as a price for their support.

These surges have occurred in previous administrations, and a variety of factors, from poverty and violence to natural disasters, contribute to the encouragement of people to leave their home countries and head north. This is now Biden’s challenge, to expedite the handling of the unaccompanied minors, to establish a clear policy and to calibrate its messaging both for those in other countries and for a domestic audience that will be judging the administration.