Near dawn on Friday, the line of trucks waiting to cross the border from Mexico into the United States stretched for more than three miles and wasn’t moving.

Arturo Ornelas, a Mexican truck driver, was four places from the front, but his choice position had not come without sacrifice: He had joined the line at 8 a.m. Thursday and had spent the intervening 22 hours slouched in – or stretching his legs alongside – his truck, carrying a load of copper wire from a factory in Ciudad Juarez, Mexico, to a warehouse in neighboring El Paso.

But now his goal was finally, seemingly within reach, and he could see the twinkling lights of the American city through the nearby border fence, on the other side of the Puente Libre, or Free Bridge.

So close, he muttered, yet so far.

President Trump may have relented Thursday on his threat to close the southwest border of the United States in punishment for what he has said was Mexico’s failure to control illegal migration. But for a week now the border has, in effect, been partly closed because of American staffing shortages – costing businesses millions of dollars a day, according to industry officials, and causing painfully long delays for people and goods trying to legally cross the border.

Last week, the Trump administration announced it was pulling 750 border agents from their normal assignments at specific ports of entry on the border, and reassigning them to help process the surge in migrants who have been crossing the border illegally and seeking asylum.

The redeployments have caused slowdowns in inspections – for passenger and commercial traffic – at key crossings along the border, including between Ciudad Juarez and El Paso; Tijuana, Mexico, and San Diego; Nogales, Mexico, and Nogales, Ariz.; and Nuevo Laredo, Mexico, and Laredo, Tex.

The delays, which began on March 29, have been particularly severe for trucks delivering commercial goods from Mexico to the United States, with long waits fouling up production and delivery schedules on both sides of the border. According to the United States Chamber of Commerce, nearly $1.7 billion in goods and services flow across the border every day.

Mexican trucking industry officials and other business leaders have reported millions of dollars a day in lost commerce and extra costs associated with the delays. Some companies in Mexico have been forced to slow or halt production as a result of the delivery delays, they said.

Some firms have even resorted to shipping their products by air despite the significantly higher costs, Manuel Sotelo, a national vice president of the National Chamber of Freight Transportation in Mexico, said Friday.

Business and labor leaders have warned that if the delays persist, they could lead to the cancellation of contracts and to widespread layoffs.

Mr. Sotelo summed up the impact in one word: Catastrophic.

The hardship has been particularly severe in Ciudad Juarez, a border city and major industrial center with more than 300 assembly plants covering a range of industries, including auto parts, cellphones, computers and household electronics.

In Danger, 280,000 Factory Jobs, the front-page headline of El Diario, a newspaper in the city, announced on Friday.

In a letter to President Andres Manuel Lpez Obrador of Mexico on Friday, the Ciudad Juarez chapter of the Business Coordinating Council estimated that late deliveries would cost Mexican firms $2.1 million in overtime per day.

The council also estimated that delays for trucks crossing from Ciudad Juarez to El Paso had stretched to eight hours on average. But many truckers were reporting far longer waits.

Mr. Sotelo, who owns a trucking company, said that on Wednesday he dispatched 15 tractor-trailers to one of the crossings between Ciudad Juarez and El Paso. When they arrived, at about 3:30 a.m., there were already 200 other trucks in line. Twelve of his trucks were able to cross, barely making the cutoff at 11 p.m. when the crossing closed for the night. The other three had to wait until the following day.

Under normal circumstances, he said, a truck can cross the border here within two hours.

Business leaders said the only other border crisis that approached this one in severity was provoked by the Sept. 11 terrorist attacks. After that, we had waits of up to six hours during the following days, Mr. Sotelo said. Today we are three times worse.

The Trump administration has characterized its redeployment of agents as a necessary step in dealing with an urgent crisis, especially in the region around Ciudad Juarez and El Paso, which has been in the vortex of the illegal migration debate.

The United States Border Patrol’s El Paso sector – which covers a 268-mile stretch of border through the two westernmost counties of Texas, including El Paso, and New Mexico – has seen a huge surge in unauthorized migrants trying to cross.

This cause, and the resulting effects, came into sharp focus shortly after dawn on Friday for Hector NÃºñez, a driver with a Mexican trucking company.

He and his rig were in the middle of the three-mile line of trucks waiting to cross the Free Bridge into El Paso. He was killing time with a colleague outside their trucks, parked along a highway that runs along the Rio Grande, when suddenly they noticed something unfolding on the other side of the river, along the border fence.

At a gap in the fence, more than two dozen migrants were sitting in a row in the dirt, with several Border Patrol officials standing over them. In recent weeks, undocumented migrants, often seeking asylum in the United States, have waded across the river, barely a trickle of septic water in this location, and presented themselves to the American authorities permanently guarding the gap.

Mr. NÃºñez, 54, understood that this sort of unauthorized crossing between legal ports of entry was precisely what was contributing to the extraordinary delays he was enduring this week.

But he doled out his criticisms widely. He blamed Mr. Trump for choking us with his brand of politics. He blamed his own president, Mr. Lpez Obrador, for not doing enough to halt illegal migration through Mexico.

And he blamed the migrants for using Mexico as a trampoline to the United States, illustrating his remark with a bunny hop.

But he also said he could empathize with the migrants. It’s a dream that everyone has, he said.

Mr. NÃºñez gestured toward El Paso. My dream is one day to have a tractor-trailer on that side, he said. Some day I want to arrive in the United States and say, ‘I’m an American truck driver!’ That’s my dream. 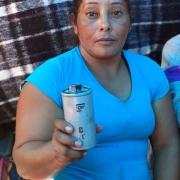 The Haunting Power of a Viral Photo from the Tijuana Border 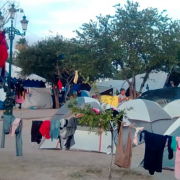 Desperate and alone: The painful consequences of family ‘self-separation’ at the border 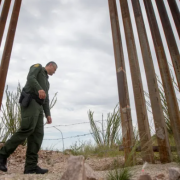 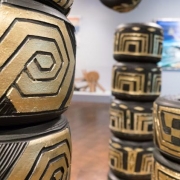 The border as muse: Two PST art shows look at flow of humanity between the U.S. and Mexico

With focus on Mexico, apprehensions grow at Canadian border
0 replies

‘Someone Is Always Trying to Kill You’

U.S. Says It Could Take 2 Years to Identify Up to Thousands of Separated Immigrant... Scroll to top