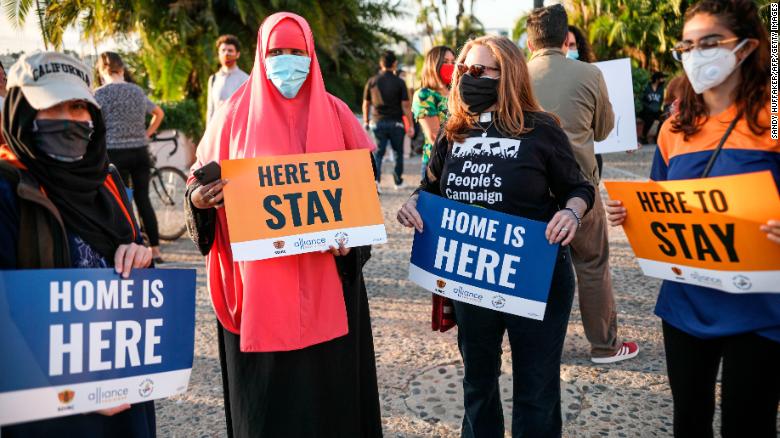 People hold signs during a rally in support of the Supreme Court’s ruling in favor of the Deferred Action for Childhood Arrivals (DACA) program, in San Diego, California June 18, 2020.

(CNN)The Biden administration Monday morning took steps to save the Obama-era DACA program that shields hundreds of thousands of undocumented immigrants brought to the US as children from deportation.

The Deferred Action for Childhood Arrivals program has been the subject of ongoing litigation since it was established in 2012. President Donald Trump tried to terminate the program, an effort blocked by the Supreme Court.
For years, Congress has tried and failed to pass legislation to provide a pathway to citizenship or otherwise address the immigration system. In the absence of legislation, the Obama administration and now, the Biden administration has relied on DACA to ensure the group known as “Dreamers” — many of whom are now adults — can stay and work in the US.
As of March 31, there were 616,030 DACA recipients, the majority of whom are from Mexico.
Monday, the Department of Homeland Security announced a proposed rule which will go through a public comment period but stressed that it is still not a final substitute for congressional action.
“The Biden-Harris Administration continues to take action to protect Dreamers and recognize their contributions to this country,” Homeland Security Secretary Alejandro Mayorkas. “This notice of proposed rulemaking is an important step to achieve that goal. However, only Congress can provide permanent protection. I support the inclusion of immigration reform in the reconciliation bill and urge Congress to act swiftly to provide Dreamers the legal status they need and deserve.”
The proposal comes as President Joe Biden’s immigration agenda has come under intense scrutiny by Democrats and Republicans. Last week, more than 14,000 migrants, primarily Haitian, were held at a camp under a bridge at the US-Mexico border in Del Rio, Texas. The administration swiftly removed about 4,000 of those migrants under a Trump-era public health rule that has remained in place.
According to the proposed rule, to qualify for DACA, individuals must have arrived to the US before their 16th birthday, have continuously resided in the US since June 15, 2007, are currently in school or have graduated, have not been convicted of a felony, and do not pose a threat to national security or public safety, among other criteria.

In July, Judge Andrew Hanen of the Southern District of Texas ruled that DACA violated the Administrative Procedure Act, which dictates what procedures agencies must go through to implement certain policies. He blocked the government from approving new applications for the program, but his order allowed the program to continue for current enrollees while the case is litigated.
Following Hanen’s ruling, Mayorkas said the department would engage in a public rulemaking process “to preserve and fortify DACA.”
Hanen stayed his order for current DACA recipients. As long as that stay is in effect, those recipients can renew, a process that happens every two years. New enrollees are still blocked from the program under Hanen’s ruling.
The Justice Department appealed the ruling earlier this month.
The rule will be published in the Federal Register on Tuesday and will be open for a 60-day public comment period.
This story has been updated with additional details.
by2021, Biden Administration, CNN, DACA, News, Policy and Justice, Priscilla Diaz, September 2021/inNews, Policy and Justice

Mayorkas: About 4,000 migrants in Del Rio have been expelled under Covid-19...