After long hours at his day job, Sergio Cordova was driving home to pick up supplies and clothing for the tired and hungry asylum seekers who were camped out just a few miles away, in Matamoros, Mexico, waiting to be let in.

It was cold and raining and miserable. Zero tolerance at the United States border meant they were stuck outside.

From behind the wheel of his silver Honda Pilot, Mr. Cordova pointed to a squat, beige building called Casa Presidente.

That’s where they house the kids, he said as we cruised down Ruben M. Torres Sr. Boulevard.

He was referring to the babies and toddlers seized by border agents from the hundreds of migrant parents they arrested for illegal entry last spring under President Trump’s family separation policy. Miles down the road, he gestured toward a converted Walmart housing the older children, Casa Padre.

A few months ago, you couldn’t drive around here without passing a satellite truck or television crew. All the news media was here, Mr. Cordova said. Lawrence O’Donnell came one time.

Lester Holt of NBC, too. Gayle King of CBS. Tom Llamas of ABC. And so many other correspondents and producers that the hotels were brimming with them.

But that was when Brownsville was riding the crest of The Algorithm as the trending topic of the day. No matter how you got your news, all you heard or saw or read about was the human strife and suffering along this stretch of the Rio Grande.

By now, the logic of The Algorithm – the recommendation systems that Twitter and Facebook use to serve up content – has made itself felt even outside social media. In a race for ratings or clicks, news organizations are feeding our increasing addiction to ever-faster streams of fresh information. A dopamine hit for every screen-refreshing swipe.

The eyeballs go to the hottest, newest bit of news, which can block out everything else – until the next viral hit comes along. It can be as simple as Horseface and I like beer, or as complicated as the crisis at the border, so long as it sticks to the basic elements required by The Algorithm.

It’s ‘What is new, now,’ said Brian Rosenwald, a historian of media and politics at the University of Pennsylvania. It’s stories that fit into the soap opera every day and have compelling video and pictures and black and white story lines.

Once a narrative stops refreshing its plot, it loses its sex appeal and its ability to cut through, Mr. Rosenwald said.

That’s how you get Donald Trump and Kanye West in the Oval Officeinstead of Brownsville, he added.

President Trump understands as well as anyone else that the news spoils go to whoever controls The Algorithm. Its rules aren’t really so different from what drove the New York City tabloids that gave Mr. Trump a crash course in media manipulation back in the ’80s and ’90s, when he was hyping his next development, be it personal or business.

It was Mr. Trump who brought The Algorithm to Brownsville in the first place when he pushed a zero tolerance policy that included separating children from their parents. The story had all the elements it needed to trend for a couple of weeks.

There were photographs of children in cages, and the especially powerful shot by John Moore of Getty of a little girl sobbing as agents searched her mother at the border. The president poured on the gasoline of outrage by tweeting that his policy was the Democrats’ fault, and his oldest son liked a post suggesting the children were crisis actors.

In my conversations with several reporters on the beat, they acknowledged that Mr. Trump has paradoxically drawn attention to the crisis. They noted that his administration’s draconian measures were built on Obama-era tactics that didn’t always get the scrutiny they warranted.

At some point, though, the president lost control of the narrative. Republicans on Capitol Hill joined every first lady, including, eventually, Melania, in calling for a halt to the child-separation policy.

In late June, Mr. Trump signed an executive order meant to end the child separation policy – and then quickly changed the subject with tweets about his Supreme Court nominee, Brett Kavanaugh, and what he called the rigged witch hunt by the special counsel. The border story stopped driving clicks, and the media circus pulled up its stakes.

Real life went on as real people dealt with the consequences.

Mr. Cordova and I were now in his garage, loading his Honda with the supplies. As he pointed to a white onesie, he was reminiscing about a meme he had created. He and his partner, Michael Benavides, both of whom work in special education at the local school district, strung seven onesies together on a clothesline and had them spell REUNITE to protest family separation.

It was in a lot of national papers, Mr. Cordova said.

But, he asked me, Where are all the cameras now? The kids are still in there.

Scores of them are still in American facilities as the authorities look for their parents, many of them deported. There are new worries that some may be put up for adoption, as The Associated Press reported.

I had come to Brownsville to see what a crisis looks like when The Algorithm leaves it behind. It looks like Mr. Cordova’s garage – a makeshift relief center with racks of clothing and plastic bins containing over-the-counter medicines and canned goods. He and Mr. Benavides put it together on their own because, though they have full-time jobs, they saw a humanitarian need going unfulfilled.

Mr. Cordova said he has been able to keep the donations coming through Facebook and GoFundMe – enough to maintain a tiny apartment with a kitchen near the bridge, where another volunteer, Brendon Tucker, cooks the meals.

That night, there had been requests for ponchos, pants, feminine hygiene products – all of which they loaded into bags – and food, always food.

We drove to the apartment to pick up the dinner Mr. Tucker had prepared – roasted chicken with rice – and took it, along with the supplies, across the Brownsville-Matamoros bridge in a handcart as a cold drizzle fell. 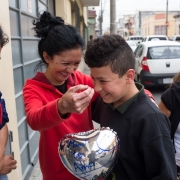 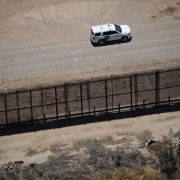 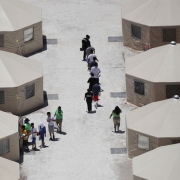 In Oregon, a Community Responds to Imprisonment of Migrants

Immigrant Stereotypes Are Everywhere on TV Scroll to top