More than 1,000 people were waiting in Tijuana last week to ask the U.S. for asylum, according to an official list that tracks processing at the San Ysidro Port of Entry.

Many of them are families.

San Ysidro has had a line of asylum seekers off and on since last year, when policy changes designed to keep more immigrants in custody began clogging the processing system for new border arrivals, officials said. That line has remained a constant since at least late April.

On any given day, people passing by El Chaparral, the Tijuana side of the PedWest border crossing, can see at least 100 asylum seekers waiting under the shade of trees that line the end of the plaza.

For mothers waiting to cross, the constant policy shifts mean they have no idea what rules will be in place once it’s their turn for processing. Despite the uncertainty, they say they are determined to try.

Alejandra, a 26-year-old mother from Guatemala traveling with her 4-year-old son and 2-year-old daughter, said she decided to come even though she knew someone who’d recently been separated from her children at the U.S. border. She did not want to be fully identified out of fear for her life.

I was scared, Alejandra said in Spanish. I was scared they would separate us too.

Death threats back home left her no choice, she said. She felt she had to come.

She said she has a cousin living in the U.S. who can help her family get settled, a major reason she chose to ask for help here instead of in Mexico, where she doesn’t know anyone.

She had heard about the Trump administration’s plan to expand family detention, part of the executive order ending family separation.

It worried her, but it did not change her mind. She wants her children to grow up without the constant fear they would live with in Guatemala, she said.

It’s difficult to get used to the changes, she said of the shifting immigration policies. More than anything, we have to have patience.

The administration has hoped that prosecuting asylum-seeking parents who illegally cross the border with their children would deter immigrants, particularly those from Central America.

Some asylum-seeking parents presenting themselves at ports of entry, which administration officials have said is the legal way to ask for asylum, have been separated from their children. In some of those cases, officials said that they either couldn’t verify the parent-child relationship or that the parent had a criminal history, which required placement in an adult immigration detention facility.

Along the California border, the majority of families come to ports of entry to ask the U.S. for asylum protection rather than crossing the border illegally.

So far in fiscal 2018, 9,670 family members have come to ports of entry without documents to seek entry into the U.S., while 3,609 were caught illegally crossing the border, according to data from U.S. Customs and Border Protection.

President Trump’s zero tolerance immigration policy has come under fire in recent weeks after it resulted in the separation of more than 2,000 children from their parents or guardians crossing the border. Trump last month announced that the administration would end the policy, but the government has reunited only a handful of the families involved.

Administration officials said Friday in court filings before a federal judge in Los Angeles that rather than separate families, they planned to hold parents and children together in indefinite detention as they await their court dates.

Luz, a 30-year-old mother who fled escalating violence in Jalisco, a state west of Mexico City, with her 6-month-old daughter, hoped that her turn to ask for asylum would come before the end of the week. She had already been waiting for three weeks.

She knew of two or three families who had gone back home after learning about the possibility of separation, but she said most had stayed.

She hadn’t heard about families being separated before she arrived in Tijuana.

When she found out, she decided to go ahead with her plans. She’d been told that officials weren’t likely to take her daughter away given how young she was. She has family in the U.S. who have promised to take care of her.

After Trump’s executive order ending separation, she felt less worried, but she still had doubts, she said. She checked for news on U.S. immigration policy daily using the shelter’s internet.

We’re going to risk it because we can’t go back to our city, Luz said. Maybe we’ll spend one or two days apart, but we’ll be alive. In our town, they will kill us.

Not everyone chooses to leave Tijuana.

Leonor Rivera Medrano, 50, arrived in the border city about two years ago from El Salvador. She meets many families from her country who are looking for safety.

None of them decide to stay in Tijuana more than a couple of months before continuing on to the U.S., she said.

She knows too well the conditions that cause people to come here. She was also fleeing gang violence in her home country when she made her way to Tijuana.

When gang members began pressuring her for rent payments because she owned a successful beauty salon, she resisted. Corrupt police helping the gang locked her in jail for a few days, she said.

Then, the gang arranged for two cars to slam into her when she was riding her motorcycle to work. She spent months in a hospital recovering, she said.

When she got out of the hospital and saw the gang was still watching her house, she went straight to a bus station and left the country.

All of this was destroyed by the gangs, Rivera Medrano said, scrolling through Facebook photos of her old business on her phone. It’s all of my life that was thrown in the trash.

When she first got to Tijuana, friends took care of her until she had steady income to support herself. A church in Acapulco helped her file paperwork for legal residency in Mexico. She’s now registered to vote.

Now, I have my papers. I go here and there – I’m Mexican, she said, laughing.

Her 16-year-old son lives with her in Tijuana. Back in El Salvador, he struggled in school, she said. In Mexico, he’s a star student.

They don’t have to worry about anyone killing him or about gangs trying to recruit him anymore, she said.

Here, he doesn’t feel the pressure of back home, Rivera Medrano said. We walk. We go to parties. Nothing happens.

Rivera Medrano owned a house in El Salvador. She dreams of saving up to buy one in Tijuana. 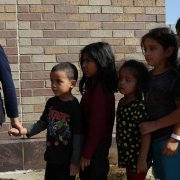 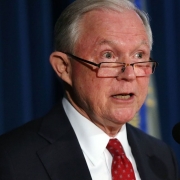 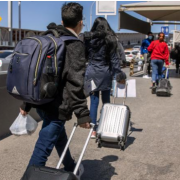 US Says Crossing Is Full Before Caravan Tries to Seek Asylum 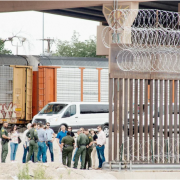 The Trump administration says it’s a ‘myth’ that families...