An outrage at America’s border

Patrice Lawrence is co-director of UndocuBlack, a community of currently and formerly undocumented Black people. The opinions expressed in this commentary are solely those of the author. View more opinion articles on CNN.

(CNN)A human-rights catastrophe has taken shape on the border in Texas — and it has happened on the Biden administration’s watch. Monday, the nation saw horrifying images of Border Patrol officials appearing to chase and confront asylum seekers, who were largely Haitian, near the international bridge between Coahuila, Mexico, and Del Rio, Texas. 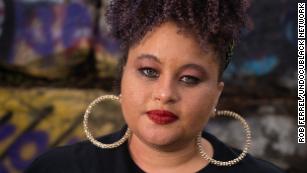 Patrice Lawrence
The video appears to show abusive treatment by agents on horseback trying to corral terrified migrants. As CNN reported: “In one video by Al Jazeera English that circulated widely on social media, an agent yells, ‘This is why your country’s sh*t, because you use your women for this!” at a group emerging from the river. His horse charges, attempting to cut off a family’s path to the camp, as a young girl in a green dress jumps out of the way.'”
The White House will be hard-pressed to explain or defend such treatment of human beings whose only offense was to seek refuge in America, as so many have done, after fleeing a country torn by political violence and natural disasters.
Joe Biden’s administration is making things worse by refusing to process these asylum seekers, instead herding hundreds of them onto planes and back into harm’s way in Haiti.
There is no moral justification for this behavior. First, the facts. Haitians, like all people, have a legal right to seek asylum in the United States. Although asylum seekers may present themselves at an official port of entry, they are not required to do so.
Their presence in Del Rio is not only legal, it is perfectly understandable. As anyone who follows the news already knows, Haiti, our neighbor, is in extreme turmoil. The suffering nation has endured a presidential assassination and a major earthquake within just the past three months — this in addition to a devastating earthquake in 2010, as well as ongoing and grinding poverty, gang violence and political strife.
Many in the Del Rio encampment left Haiti more than a decade ago, and had been living in countries like Chile, Brazil and Panama.
The Biden administration itself recognized the unrest in Haiti when it issued a notice of Temporary Protected Status for Haitians living in the United States, acknowledging that conditions in that country are too dangerous for many Haitians to safely return home.
What should the United States do? It should honor the law on asylum and allow these migrants to exercise their rights. The United States has the tools to ensure an orderly and fair process to determine each asylum seeker’s case. We have done this before: From 1980 to 1990, the United States processed more than 100,000 Cubans seeking safety during the Mariel boatlift. And this was done under a Republican administration.
The moral argument is even clearer. Haitians have gone through tremendous hardship, and are asking only for the opportunity to exercise their right to seek asylum. Groups like Haitian Bridge Alliance stand ready to assist those seeking safety, as do dozens of religious and non-religious community partners.
Anti-immigrant extremists have politicized an issue that should be purely humanitarian. The former Donald Trump adviser Stephen Miller and his ilk made their political fortunes by dividing Americans and causing them to fear immigrants, especially Black immigrants.
I should know: my organization, UndocuBlack, came into being just before Trump was elected President, and my colleagues and I watched how anti-Blackness and xenophobia permeated the conservative end of the political spectrum and poisoned the national dialogue in the last four years.
We had hoped the new administration would forcefully reject the politics of hate. But it has been cowed into adopting some of the policies that Biden’s predecessor used to keep people out.
Maybe the appalling images of Border Patrol officers on horseback will arouse the same ire as those of children in cages during Trump’s presidency. But I fear that Biden will be given a pass, that he will get the benefit of the doubt because vulnerable communities still need so much from him.
The Biden administration could have made a strong statement in favor of due process and dignity by allowing for an orderly asylum process. Instead, it has opted for mass expulsions of vulnerable people.
What the administration is allowing to happen to my Caribbean cousins echoes the racism Republicans wage openly. Last week, Lieut. Gov. Dan Patrick of Texas warned Fox News audiences that non-White children were replacing White children. Patrick also blamed Black people for low vaccination rates, despite evidence that more White Texans remain unvaccinated than Black and Hispanic Texans. Anti-Blackness is prevalent on both sides of the aisle.
Last fall, I used my voice to mobilize my community members to reject the politics of division. We were told that the Biden administration would work toward racial healing and bring forth a new era of inclusivity for immigrants. Instead, we are getting the same old anti-Blackness, cruelty and dysfunction. This was not the mandate the Biden administration was given. The administration has the tools to do the right thing. They should use them.
by2021, Asylum, Border, CNN, Del Rio, Haitian Migrants, News, Patrice Lawrence, September 2021, opinion/inNews, Opinion

The pandemic has hit the restaurant business hard. That’s creating an...